USS Denver to Decommission after 46 Years of Service 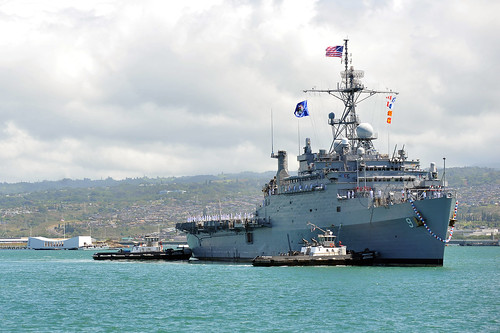 PEARL HARBOR - After 46 years of service, USS Denver will hold its decommissioning ceremony at Joint Base Pearl Harbor-Hickam at 10 a.m., Aug. 14.

"It is with a great sense of pride that Denver will decommission as the oldest deployable warship in the Navy and as the last and longest serving Austin-class amphibious transport dock," said Commanding Officer Capt. Michael P. Donnelly, a native of Kent Island, Maryland. "Her extended service life is a true testament to the men and women of Lockheed Shipbuilding who built her and the generations of crews who maintained and sailed her through the full spectrum of missions: from disaster relief to Gulf War command ship."

The ship was launched on Jan. 23, 1965 and commissioned on Oct. 26, 1968, being christened by her sponsor, Mrs. John Love, wife of the governor of Colorado. Denver is the third U.S. Navy ship to bear the name of American pioneer James William Denver and the capital of the state of Colorado. Over its history, the ship played a significant role in several operations, most notably Operation Frequent Wind, the evacuation of Saigon, Vietnam in April 1975.

"That she finishes her operational service in our forward-deployed naval forces is fitting to the reputation her crews have earned her over 46 years of service and is fittingly in synch with our Navy's current priorities: warfighting first; operate forward; be ready," said Donnelly. "Denver has been the example of these tenets."

Guest speaker for the decommissioning will be Rear Adm. Hugh D. Wetherald, commander of Amphibious Force 7th Fleet and Expeditionary Strike Group 7. The ship has been part of the forward-deployed Bonhomme Richard Amphibious Ready Group, which reports to Wetherald, who is headquartered in Okinawa, Japan.