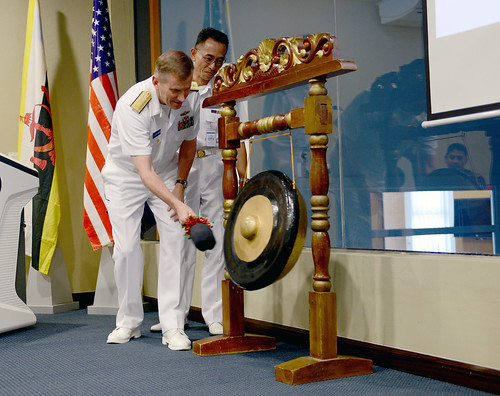 Original CARAT partners, Royal Brunei Armed Forces (RBAF) have participated since the exercise began in 1995. CARAT Brunei marks the final phase of the 2014 series, which began in May with partner nations in South and Southeast Asia. It provides a credible venue for regional navies to share best practices, foster relationships and enhance maritime security cooperation.

"The sea has connected our nations, our people and our naval forces since the USS Constitution visited Brunei for the first time in 1845," said Williams. "As our premier naval exercise rooted in longstanding cooperation at sea, CARAT Brunei provides unique opportunities to sharpen skills and work together in ways that will serve our nations and the region for many years to come."

Additional symposia ashore will bring together professionals from both navies to discuss best practices in military law and military medicine. Japan Regional Maintenance Center divers will train with their RBAF counterparts in hull inspection and surface supplied breathing techniques.

Community service events and joint performances by the U.S. 7th Fleet and RBAF bands will occur throughout the local community.

"We deeply value our naval partnership with the RBN, as evidenced by their participation in both the Rim of the Pacific exercise earlier this summer and the Southeast Asia Cooperation at Sea exercise in August, " said Kacher. "This week's CARAT is another great opportunity for our navies to get out to sea together and strengthen our ability to operate safely and professionally with one another."