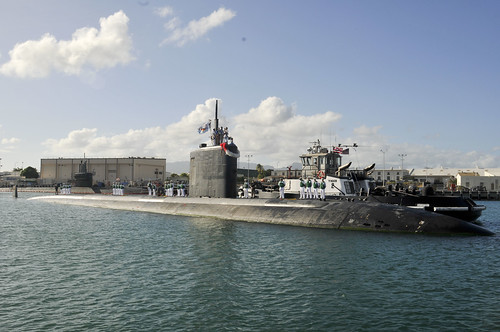 PEARL HARBOR, Hawaii - Family and friends lined the submarine piers of Joint Base Pearl Harbor-Hickam, Nov. 21, for a warm aloha welcome as the Los Angeles-class fast attack submarine USS Columbia (SSN 771) returned from a scheduled deployment to the Western Pacific.

The excited crowd cheered and waved signs, banners, and leis as the submarine came into view in the harbor. The submarine's commanding officer, Cmdr. John Friedman, said the crew was outstanding and productive throughout the deployment.

"The ship and crew performed extremely well during our deployment to the 7th Fleet," said Friedman. "I am very proud of their accomplishments and consider it an honor to have served with them."

In addition to gaining the experience of operating in the Western Pacific, the deployment afforded Sailors the opportunity to work on qualifications. Thirteen enlisted Sailors and three officers of the 150-man crew became submarine qualified and are now able to wear their respective submarine warfare insignia also known as the coveted "dolphins."

Ashore, the crew enjoyed visits to Sasebo and Yokosuka, Japan; and Singapore.

"Singapore was an especially exotic place with a very different culture from America," said Sonar Technician Submarines Seaman Angelo Cosentino. "There were many different customs, and it was a very diverse population with different tastes."

Friedman commended the crew on their conduct while in other nations as well."They were exemplary ambassadors of the United States and represent the best the country has to offer," said Friedman.

The submarine's chief of the boat, Master Chief Machinist's Mate Wayne Fetterly, said the crew performed exceptionally well considering many were on their first deployment.

"Having successfully completed several missions on deployment, the crew is now looking forward to being home in Pearl Harbor and spending time with the loves ones," said Fetterly.

Corey Lambert, fiance of Yeoman 2nd Class David Copeland, said she is looking forward to seeing his face and giving him a big hug.

"We are getting married in a couple of weeks, and I'm so excited!" said Lambert.

Also among the excited crowd were newborn children, waiting to see their dads for the first time.

"He is so excited. We have been waiting for this day!" said Ranger.

USS Columbia, commissioned in 1995, was the last Los Angeles-class submarine to be built at Electric Boat Shipyard in Groton, Connecticut. One of the most versatile ships in the world, the submarine is capable of numerous types of missions in myriad regions including long-range Tomahawk strike operations, anti-submarine and surface ship tracking operations, surveillance and intelligence gathering, and even Special Forces insertions. 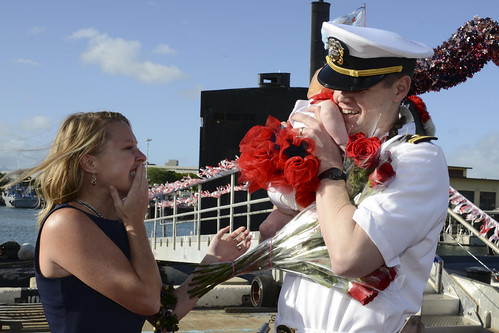