From the National Park Service 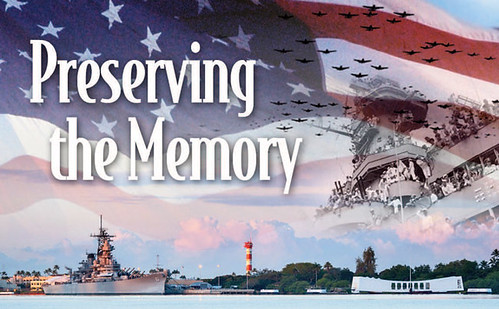 The ceremony will take place on the main lawn of the Pearl Harbor Visitor Center, looking directly out to the USS Arizona Memorial, at the World War II Valor in the Pacific National Monument.

PEARL HARBOR, Hawaii - The National Park Service and the U.S. Navy will host a joint memorial ceremony on Dec. 7 from 7:45 to 9:30 a.m. commemorating the 73rd anniversary of the attack on Pearl Harbor.

The ceremony will take place on the main lawn of the Pearl Harbor Visitor Center, looking directly out to the USS Arizona Memorial, at the World War II Valor in the Pacific National Monument.

More than 2,500 distinguished guests and the general public are expected to join current and former military personnel, including Pearl Harbor survivors and other World War II veterans, for the anniversary observance of the 1941 attack on Pearl Harbor.

The theme of this year’s historic commemoration, “Preserving the Memory,” focuses on how to keep the story of the attack on Oahu and World War II alive for the nation and the world.

Highlights of the ceremony will include music by the Navy’s U.S. Pacific Fleet Band, morning colors, a Hawaiian blessing, a cannon salute by members of the U.S. Army, wreath presentations, echo Taps, and recognition of the men and women who survived the attack and those who made the ultimate sacrifice for their country on Dec. 7, 1941.

At 7:55 a.m., the exact moment the Japanese attack on Pearl Harbor began 73 years ago, a moment of silence will be observed. A U.S. Navy ship will render honors to the USS Arizona and all Pearl Harbor survivors, and a fly-over will be conducted above Pearl Harbor.

The ceremony will conclude with a “Walk of Honor” by Pearl Harbor survivors and other World War II veterans through an honor cordon of military service members and National Park Service men and women.

In conjunction with this year’s theme and to connect Pearl Harbor survivors across the U.S. with the commemoration ceremony taking place at Pearl Harbor, the National Park Service is hosting a broadcast via live webcast of this year’s event. Prior to the start of the ceremony, Pearl Harbor survivors and WWII veterans will be interviewed and viewers will get a “behind the scenes” look at the ceremony. Those who are unable to attend the ceremony in person will be able to watch the event in their hometown as it takes place.

Online registration to view the event is required. All those interested in watching are encouraged to visit the following link to sign up: http://bit.ly/LiveBroadcastDec7. Learn more about Pacific Historic Parks on their website.

Additional parking will be available at Richardson Field and Aloha Stadium. Free shuttles will be provided from the stadium to the visitor center. The public is encouraged to arrive early to allow time to park and go through security at the visitor center.

Due to the morning ceremony, public tours on Dec. 7 to the USS Arizona Memorial will operate on a special schedule. The first public tour will begin at 11 a.m. with the last tour beginning at 1 p.m. Tours begin every 15 minutes and include a 23-minute movie presentation followed by a short boat ride and visit to the memorial. Tickets are free and distributed on a first-come, first-served basis.

Cameras are permitted; however, due to strict security measures, camera bags, purses, handbags and/or other items that offer concealment are not allowed. Bag storage is available at the USS Bowfin Submarine Museum and Park.