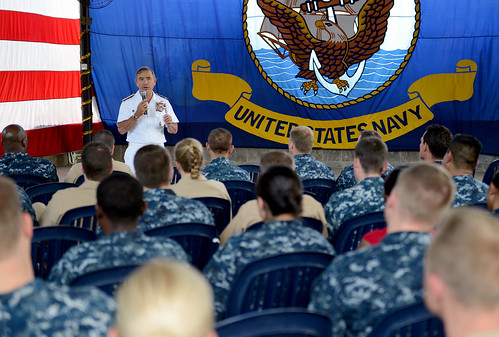 SINGAPORE - Adm. Harry Harris Jr., commander of the U.S. Pacific Fleet conducted an all hands call at Commander Logistics Group Western Pacific (COMLOG WESTPAC) in Singapore, Dec. 18, during a trip to strengthen maritime partnerships in support of America's rebalance to the Indo-Asia-Pacific.

Following two days of leadership engagements in Vietnam, the visit to Singapore marked Harris' 19th trip to the region in 2014.

"We have a strong partnership with Singapore for all the right reasons," said Harris. "Your work here is critical as we continue our strategic rebalance to the Pacific."

During the question and answer session, Harris highlighted rotational deployments of littoral combat ships (LCS) to Southeast Asia, including USS Freedom's (LCS 1) inaugural deployment last year and USS Fort Worth's (LCS 3) recent arrival to the U.S. 7th Fleet area of responsibility as part of a 16-month deployment. He underscored the forward presence of LCS as a crucial part of the U.S. Navy's ongoing support to the rebalance.

"CARAT is one of the most important exercise series we do as a Navy. The individual countries appreciate that we can tailor each CARAT to their needs, including advanced surface warfare, humanitarian aid and disaster relief, shipboard damage control, and amphibious assault exchanges," said Harris.

Harris responded to questions from the audience on a wide range of topics, including the 2015 budget, deploying new platforms, sexual assault programs and ship maintenance. In closing, he emphasized that the Navy's continued forward presence is critical to the future of the fleet.

"It was good to hear from the admiral about plans for the future of the Pacific Fleet and the capabilities of LCS during our rebalance to Asia. I was honored to meet and shake the hand of such a senior leader," said Yeoman 1st Class James Coe, assigned to COMLOG WESTPAC.