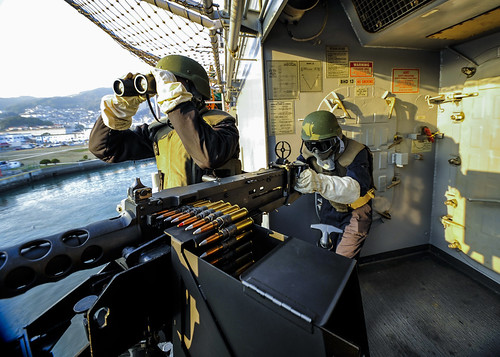 “We’re excited to get Bonhomme Richard back to sea and, along with our brothers and sisters in the 31st MEU, demonstrate our commitment to our allies in the Pacific,” said Capt. Joey Tynch, Bonhomme Richard’s commanding officer. “The crew has done an incredible job getting the ship ready for this deployment and their continuing hard work and dedicated focus to execute the basics flawlessly will carry the BHR through a safe and well executed mission.”

This deployment will also mark the first time many junior enlisted Sailors will get underway for a full deployment aboard Bonhomme Richard.

“Sailors should be at sea,” said Yeoman 3rd Class Cody Hayes. “It’s exciting to finally get underway, execute my job at sea and see the world. It’s what I joined the Navy to do and it should be a great deployment.”

Bonhomme Richard is the first of two ship’s from the ARG to get underway with USS Ashland (LSD 48) expected to join at a later date.