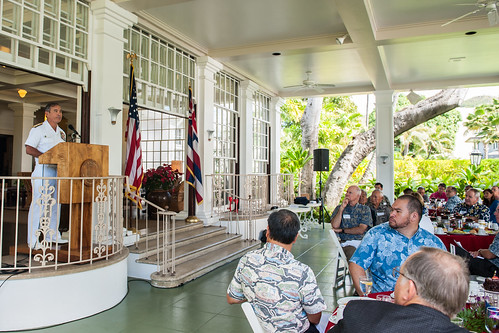 HONOLULU - The military re-balance to the Pacific is "real," and Hawaii is at the crossroads of it, but a potential Army downsizing in Hawaii that would seem to run contrary to that effort is very much a concern, military, business and elected officials said Friday.

Army Lt. Gen. Anthony Crutchfield, deputy commander of U.S. Pacific Command, said at an annual Chamber of Commerce Hawaii military partnership conference that over a recent two-year period, the Pentagon pumped $9 billion into the so-called "pivot" to the Pacific.

The worst-case scenario for the Army in Hawaii would be the loss of 19,800 soldiers and civilian workers from Schofield Barracks and Fort Shafter.

Speakers at Friday's conference echoed the "devastating" effect such a cut would have on Hawaii's economy.

"We think our impact, just last year, was about $3 billion - that's Army impact," Brooks said. "We think that the Army ought to matter to Hawaii."

The four-star general outlined the intertwined history of the Army and Hawaii, starting with a secret mission to the isles in 1873 by Army Maj. Gen. John M. Schofield to determine the defensive capabilities of ports.

Schofield recommended the United States establish a naval port at Pearl Harbor, which "opened the door" to the significant military history that's transpired there, Brooks said.

The first Army camp was established in 1898 in what is now Kapiolani Park, he said.

Schofield Barracks - named after the general who scouted the island - was located to be able to "maneuver against and anticipate an attack by the Japa­nese and the British," Brooks said.

"Hawaii is still very important to the United States Army. Just as it was in 1898, it is now," Brooks said.

The chamber helped organize a "Keep Hawaii's Heroes" petition drive in November ahead of Army "listening" sessions later this month as the service seeks to gauge public sentiment about the soldiers stationed nearby.

"The ripple effect of this loss will be dramatic," said state Sen. Michelle Kidani (D, Mili­lani-Wai­kele-Kunia) of the possible cuts. "It will be devastating, affecting every sector of our economy, from construction to retail, restaurants, real estate; professional, scientific and technical services; teachers; small business."

A decision on potential downsizing at 30 installations around the country is expected by October, the Army said.

Kidani added that it is "critical that the Hawaii community come together now to show the Army that we want to keep our military ohana here."

That effort includes the goal of submitting 40,000 signatures of support before the "listening" sessions at 6:30 p.m. Jan. 27 at the Hale Koa Hotel and Jan. 28 at Lei­le­hua High School.

The chamber said about 10,000 signatures have been gathered so far.

The partnership conference was held in an auditorium at the state Capitol with a follow-up lunch on the grounds of Washington Place.

Gov. David Ige was among several speakers to recall roots and other connections with the military in Hawaii and elsewhere.

Ige said his last summer job after working at the cannery for several summers was doing maintenance work at the submarine base at Pearl Harbor.

After becoming an engineer, he worked on Ford Island with the Pacific Analysis Corp. as a consultant to the Navy's 3rd Fleet, he said.

Ige said annual defense expenditures in Hawaii are more than $6.5 billion in direct spending and generate $14.7 billion in economic activity.

State Sen. Will Espero (D, Ewa Beach-Ocean Pointe-Ewa by Gentry-Iroquois Point) noted that his father served 21 years in the Navy, his brother "drove tanks" and his son is in the Marine Corps.

"We need to show Washington and everyone else the importance and the appreciation we have (for the military), and when decisions are being made in terms of the military in Hawaii, they are placed in our national arena," Espero said.

"I'm just hoping common sense prevails" and Army decision-makers come to the "realization that we need a strong presence here," he added.

Crutchfield, the U.S. Pacific Command deputy commander, told the group that he is constantly asked in other countries in the Asia-Pacific, "Is the re-balance real? Is the United States serious about this?"

The country has "recognized that our nation's past and our nation's future reside in the Asia-Pacific region," he said.

He added, "The re-balance - which is real - will continue" despite those budgetary and other global security challenges.

In terms of signs of the military re-balance, Crutchfield pointed to the enhanced defense cooperation agreement signed with the Philippines, the placement of two additional U.S. Navy destroyers in Japan, Marine Corps rotations to Australia, and deployment of tilt-rotor Ospreys and Global Hawk drones to Japan, to name a few steps.

And in the last decade, no nation has outpaced China in expanding their military.

"Quite frankly I have my concerns regarding China's aggressive military growth, its lack of transparency and its pattern of increasingly assertive behavior in the region," Harris said.

Now, perhaps more than ever, Harris said he finds that "many countries out there are looking to the U.S. as their security partner of choice." (see Adm. Harris' remarks.)

Reposted with permission of Honolulu Star-Advertiser.