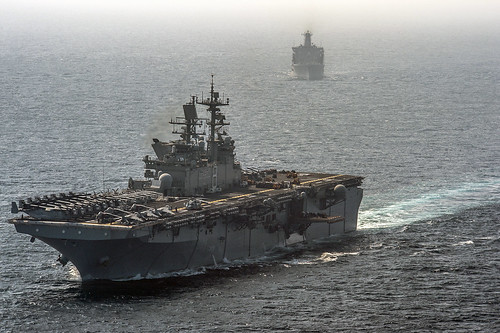 INDIAN OCEAN - After an extensive operational period with a variety of operations and exercises, two of the three ships of the Makin Island Amphibious Ready Group (ARG), along with embarked 11th Marine Expeditionary Unit (MEU), departed the U.S. 5th Fleet area of operations (AOO) and returned to the 7th Fleet, Jan. 9.

The amphibious assault ship USS Makin Island (LHD 8) and the dock landing ship USS Comstock (LSD 45) crossed the threshold while the amphibious transport dock ship USS San Diego (LPD 22) and a portion of the 11th MEU stayed behind to provide additional support to 5th Fleet until relieved by the Iwo Jima ARG MEU team transiting from the East Coast.

"We've executed a variety of missions throughout the deployment thus far, showing the versatility of the ARG/MEU", said the 11th MEU's Commanding Officer, Marine Col. Matthew Trollinger. "The preparation, hard work, laser focus and flexibility shown by everyone in this Navy and Marine Corps team have enabled us to have a positive impact on the region. For the portion of the ARG/MEU team still operating in the region, we will continue to fulfill our mission until properly relieved."

With the variety of exercises mixed with the local terrorism threats, the ships were faced with long working hours and some large underway periods. The crew of Makin Island, the flagship of the ARG, stayed out to sea for 115 consecutive days, a number stretching from before they entered the U.S. 5th Fleet AOO, while providing close-air support over Syria and Yemen and conducting Cougar Voyage.

"This deployment really proved the relevance and the expeditionary value of our naval forces. We operate forward and stay as long as necessary conducting a large menu of capability," said Makin Island's Commanding Officer, Capt. Jon P. Rodgers. "I am proud of the salt in this crew and their mission focus while spending nearly an entire 5th Fleet deployment period at sea-a checkmark in any Sailor's life."

Comstock did not have as many uninterrupted days at sea, but did get a visit from the Chief of Naval Operations (CNO), Adm. Jonathan Greenert, and Master Chief Petty Officer of the Navy (MCPON), Mike D. Stevens, a day after Thanksgiving. Greenert re-enlisted nine Sailors on the ship's flight deck that gave the crew a renewed sense of importance.

As the Sailors and Marines transition back to the U.S. 7th Fleet area of operation, noticeably pointing east toward their homeport of San Diego, senior officials are quick to point out that the focus remains on the mission at hand.

"It is important to note that we are not heading home yet, we are merely shifting focus to the 7th Fleet as part of our Western Pacific deployment. Safety and attention to detail are paramount and our success will be determined by our focus on mission readiness as we continue to sail the seas to promote peace and free trade," said Capt. Steve McKone, commodore of the ARG and commander, Amphibious Squadron (PHIBRON) Five.

The ARG is continuing on their deployment with the 11th MEU that began July 25, 2014 to promote peace and freedom of the seas by providing security and stability in the U.S. 5th and 7th Fleet AOOs.