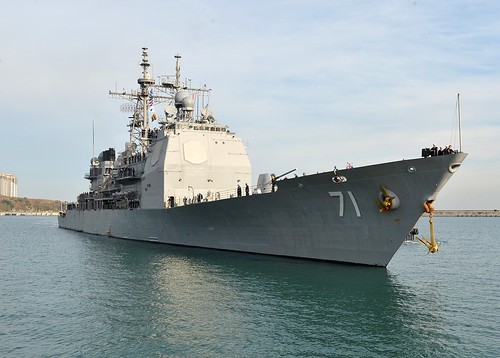 In this file photo, USS Cape St. George (CG 71) arrives in Busan, Republic of Korea, for a port visit in November. (Courtesy of ROK Navy)

During the deployment, Cape St. George and the "Blue Hawks" of Helicopter Maritime Strike Squadron (HSM) 78, Detachment 4 participated in Rim of the Pacific (RIMPAC) 2014 as part of U.S. 3rd Fleet. Upon assignment to 7th Fleet, the crew of 350 personnel and two embarked helicopters conducted various presence operations and goodwill activities with partner nations and participated in two major exercises, Valiant Shield and Keen Sword.

"I cannot be prouder of the professionalism of my crew," said Cape St. George's commanding officer, Capt. Michael P. Doran. "Every Sailor did an outstanding job this year especially during deployment. The ship excelled in every mission we were given because of their dedication and hard work."

"Each and every one of our Sailors worked together as a team to tactically employ and maintain two MH-60R helicopters in the dynamic Indo-Asia-Pacific region," said Lt. Cmdr. Jeremiah N. Ragadio, officer in charge of HSM-78 Detachment 4. "We executed a diverse mission set to include surface warfare, anti-submarine warfare and vertical replenishments. This deployment exemplified Blue Hawk professionalism and showcased the versatility of the HSM community's combat capabilities."

Cape St. George is named for the battle fought in the South Pacific off the island of New Ireland in the Bismarck Archipelago on Nov. 25, 1943. HSM-78 was established March 1, 2012 at Naval Air Station North Island, Calif. as the Navy's newest MH-60R squadron.