USS Sampson and USS Fort Worth Detach from AirAsia Search 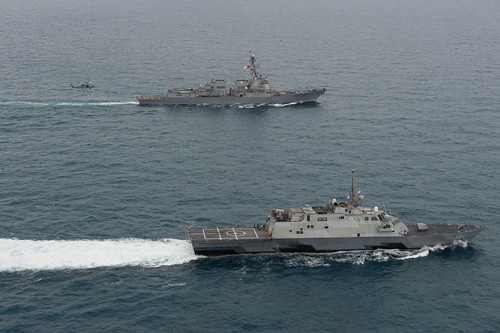 U.S. Ambassador to Indonesia Robert O. Blake noted that “the U.S. was extremely proud to assist in the international search effort coordinated by the Indonesian Search and Rescue Agency with the U.S. Navy ships USS Sampson & USS Fort Worth, helicopters, and sonar equipment. I commend the professionalism and dedication to the mission the sailors of the United States Navy exhibited while working in close coordination with their Indonesian counterparts. We are all pleased with the recovery of the black boxes and location of portions of the plane that we hope will shed some light on the cause of this tragedy. The United States offers condolences to the families and loved ones of those who perished on Indonesia Air Asia Flight 8501. Our thoughts and prayers are with those who await news on the passengers and crew who remain missing.”

Working in coordination with the Government of Indonesia, the U.S. 7th Fleet assigned USS Sampson and USS Fort Worth to the mission shortly after the Dec. 28 crash.

USS Sampson departed from Singapore Dec. 29 and arrived on station in the Java Sea Dec. 30. The guided-missile destroyer with more than 300 crewmembers immediately began conducting surface and aerial searches in coordination with Indonesia’s National Search and Rescue Agency (BASARNAS) near the suspected crash site.

Capt. Fred Kacher, commodore of Destroyer Squadron 7 and in tactical command of Fort Worth and Sampson during the search efforts reflected, “Throughout both ships’ time on station, the crews and divers performed as consummate professionals and superb ambassadors, both at-sea and ashore at Iskander Air Field. Our ability to respond quickly to this event highlights the importance of operating forward and maintaining a naval presence in Southeast Asia.”

“It was an honor to be part of this search effort,” said Cmdr. Steven Foley, USS Sampson commanding officer. “Indonesia did a tremendous job in organizing this multinational search effort, and our sailors are proud to have been able to assist.”

Working in coordination with the Government of Indonesia, the U.S. 7th Fleet tasked Littoral Combat Ship USS Fort Worth to join in the search effort. After loading supplies and embarking an eight-member team from Mobile Diving and Salvage Unit (MDSU) 1, Fort Worth departed Singapore Jan. 2 and arrived on station Jan. 3.

“The crew worked around the clock to help support this search effort,” said Cmdr. Kendall Bridgewater, commanding officer of USS Fort Worth. “The Littoral Combat Ship provided some unique capabilities to aid in the search, and I’m glad we’ve been able to assist.”

The MDSU 1 divers onboard Fort Worth operated three Tow Fish side scan sonar systems to search for wreckage on the ocean floor and provided highly accurate imagery of significant objects for further analysis. Over the course of the operation, the MDSU 1 team conducted 78 hours of side scan sonar operations over 12 square nautical miles. The MDSU divers also used the AN/PQS-2A passive sonar system for 17 hours of search time over 24 square nautical miles in an attempt to listen for the black box pings.

The MDSU 1 team also employed a remotely operated vehicle with an underwater video camera to investigate objects detected by the Twow Fish system.

The two MH-60R helicopters aboard Sampson and one MH-60R aboard Fort Worth worked together and with Indonesian aircraft to conduct both day and night operations. In total, the U.S. Navy aircraft flew 226 hours and covered 22,000 square nautical miles.

Upon departure, Sampson will continue with her scheduled deployment in the 7th Fleet area of operations and Fort Worth will return to Singapore for planned maintenance before continuing with her 16-month deployment to the Indo-Asia-Pacific.