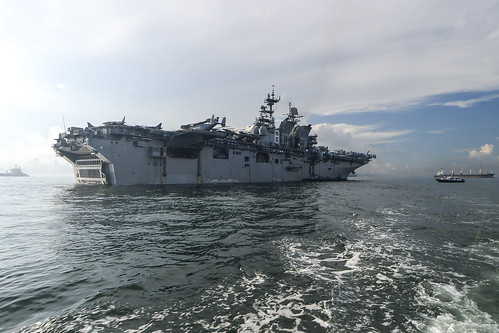 “The crew is looking forward to a return visit to Singapore,” said Makin Island’s Commanding Officer, Capt. Jon P. Rodgers. “The captivating cultures, the welcoming hospitality and the safe variety of tours and community relation events echo throughout the passageways of the ship.”

While in Singapore, many Makin Island Sailors and Marines are also expected to take advantage of MWR sponsored tours, attractions and sporting events.

“I’m really looking forward to experiencing all the culture Singapore has to offer,” said Fire Controlman 2nd Class Thao Pham, a native of Marietta, Georgia. “I’ve heard nothing but great things about this country and I’m excited to see it for myself.”

The 7th Fleet AOO includes more than 48 million square miles of the Pacific and Indian Oceans, stretching from the international date line to the east coast of Africa, and from the Kuril Islands in the north to the Antarctic in the south.