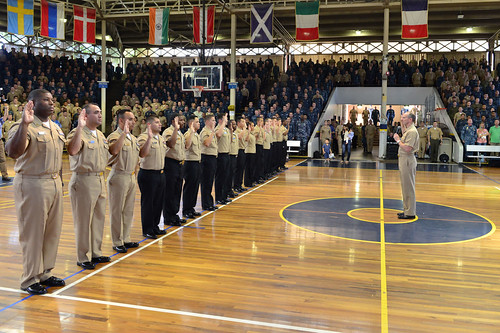 Chief of Naval Operations Adm. Jonathan Greenert reenlists 17 Sailors in front of their families, other service members and civilians prior to an all hands call on Joint Base Pearl Harbor-Hickam. (U.S. Navy/MC2 Brennan D. Knaresboro)

The all hands call, which was also streamed live online, began with Greenert reenlisting 17 Sailors and presenting each Sailor and family member a coin.

The CNO stated that the rebalance is real with the USS Fort Worth (LCS 3) in Singapore, two more destroyers moving to the western Pacific and talked about the rotational amphibious ships deploying to Australia.

"We are on our way to Australia, then to New Zealand," said Greenert. "We wanted to stop here [Hawaii] at the gateway to the Pacific to listen and learn. We're going to Darwin, where at some point by the end of this decade, we will be sending amphibious ships on deployment for exercises in the southeast area."

Greenert assured the Sailors the retirement plan option would be offered, but if you're in uniform you can still keep your current retirement plan under a "grandfather" clause.

Greenert highlighted the strategy for shorter deployments, outlining the transition of deployments to a seven-month cycle.

When asked his opinion of women's role in submarines, Greenert said, "We've had women in the Navy for over 30 years. We've worked through concerns like this before. We're on a track working through this deliberately and we will get through this just fine."

Greenert closed the event thanking Sailors for their service and highlighting the importance of taking care of one another, treating each other with dignity and respect and talking to leadership about what they can do to help Sailors. 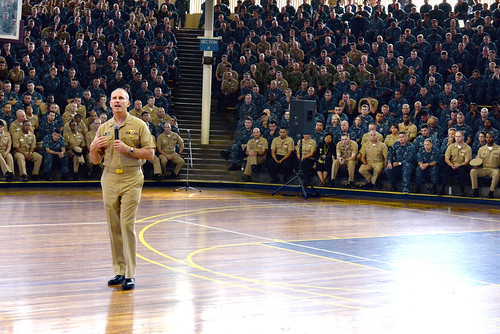