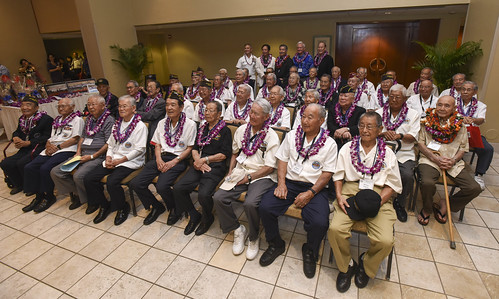 Military Intelligence Service (MIS) veterans and distinguished guests pose for a group photo before a luncheon honoring the veterans at the Hale Koa Hotel in Waikiki as part of the MIS Veterans National Reunion. (U.S. Navy/MC2 Brian Wilbur)

HONOLULU - The Military Intelligence Service (MIS) Veterans Club of Hawaii hosted a luncheon banquet in honor of the MIS Veterans National Reunion at the Hale Koa Hotel in Waikiki, March 28.

The theme of the reunion was “Keeping the MIS Legacy Alive” and was the backdrop for the grand opening of the “America’s Secret Weapon” exhibit at the U.S. Army Museum of Hawaii showcasing the contributions made by MIS and Nisei veterans.

Keynote speaker Adm. Harry Harris, Jr., commander of U.S. Pacific Fleet commended the veterans for their service and the path they forged for future generations.

“It’s no exaggeration when I say that the world we live in today was born of your achievements,” Harris said during his remarks. “And it’s no exaggeration when I say that for me to be where I am today, a Japanese-American four-star admiral, in command of the United States Pacific Fleet is because of trail blazers like the men and women of the MIS and other Nisei who advanced the cause for Japanese Americans to include the 100th Infantry Battalion, the 442nd Regimental Combat Team, and the 1399th Engineer Construction Battalion.”

The MIS veterans, primarily made up of Nisei, played a significant role in the victory over the Japanese in World War II. Roughly 6,000 Japanese Americans, using their understanding of the Japanese language and culture, helped to translate documents and intercepted communications as well as fight as infantrymen during the war in the Asia-Pacific. Their contributions helped to significantly shorten the duration of WWII and pave the way for a more diverse military.

“I’ve heard it said that the three great levelers are discipline, time, and patience. Great nations have been made greater, often by the hands of men and women of diversity, who stood out as an example of an ideal, resolutely working to affect change,” said Harris. “The Japanese Americans of yours, the greatest generation, used all three of these levelers to affect great change in our nation, and the stellar wartime record of Japanese Americans helped trigger the desegregation of the military not long after the war.”

The MIS Veterans Club of Hawaii was established in June of 1946 and has since contributed representatives to countless WWII commemorations and military ceremonies, supported charities and provided support for the Battleship Missouri. They are currently looking to expand membership.

Harris was proud to be in a room with the men and women of significant military history.

“I stand on the shoulder of giants. I’m humbled to be in your presence and thankful to play a small part in your reunion today.”

For more information on the MIS Veterans Club of Hawaii, please visit their website at www.misveteranshawaii.com 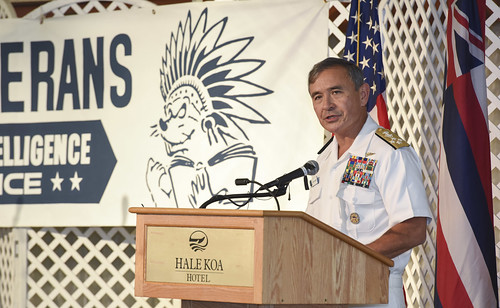 Previous story
U.S. Pacific Fleet Announces 2014 Sea, Shore Sailors of the Year
Next story
Peleliu to Decommission After More Than 34 Years of Service