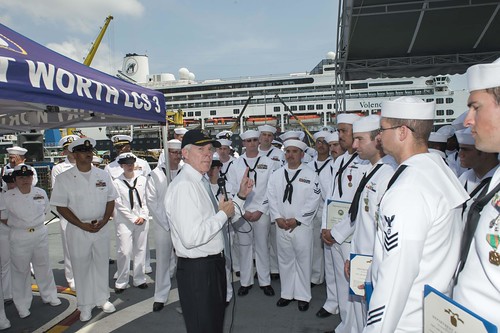 Mabus highlighted the importance of exchanges like NEA Vietnam in fostering relationships and strengthening maritime partnerships.

"As part of the Navy's forward deployed naval force, the Sailors of Fort Worth and Fitzgerald should be proud of the difference they are making during exchanges like NEA Vietnam," said Mabus. "It's through these face-to-face engagements that we are able to deepen our relationship with Vietnam."

"I am immensely proud of how far our two navies have come since 2003, when we conducted our very first U.S. Navy Goodwill and Friendship port call in Vietnam," said Osius. "It took vision, hard work, and most of all, trust, to get us to this point. If we have learned anything over the past 20 years, it's that nothing is impossible."

During his remarks, SECNAV underscored the first-ever LCS visit to Vietnam, as well as the opportunity both navies will have to practice Code for Unplanned Encounters at Sea (CUES) later this week.

"LCS is now a fixture in 7th Fleet," said Mabus. "The opportunity for Fort Worth and Fitzgerald to get underway together with the Vietnam People's Navy will build confidence and ensure safe communication when our ships meet again on the seas."

Occurring during the 20th anniversary of the normalization of diplomatic relations between the United States and Vietnam, these activities were designed to foster mutual understanding, build confidence in the maritime domain and develop relationships between the people and navies of both nations.