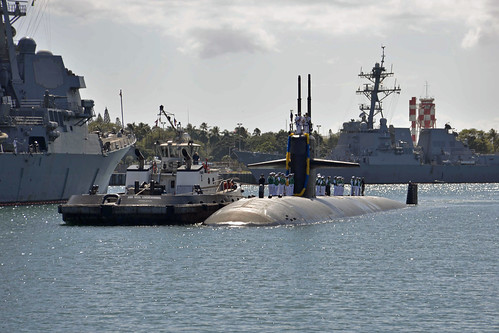 The submarine's commanding officer, Cmdr. Bob Figgs, praised his crew's productivity and professionalism throughout the deployment. "One of the greatest aspects of any deployment is watching how the crew grows and matures over the course of our time at sea," said Figgs, who hails from Kaneohe, Hawaii. "I'm immensely proud and impressed by the milestones achieved by members of the crew throughout the deployment."

Figgs added that this deployment was undoubtedly a bright spot in the Louisville's storied history. In six months at sea, she logged nearly 40,000 miles travelled across an immense tract of ocean spanning from Hawaii to the Arabian Sea. Along with participation in several multi-national exercises, she transited some of the Western Pacific's most heavily trafficked straits, marking the crossings of the equator and international dateline with traditional ceremonies.

Figgs noted that in such a challenging environment like deployment, he is glad to see his crewmembers assist one another. One such crewmember is Chief Machinist's Mate Jeff Crumrine, a 17-year submarine veteran who takes pleasure in mentoring junior Sailors.

"Many aspects of our daily life can be intimidating at first," said Crumrine, a native of Beatrice, Nebraska. "But nothing is more rewarding for me than teaching a Sailor how to respond to casualties or navigate the qualification process."

In addition to gaining the experience of operating in the Western Pacific, the deployment afforded Sailors the opportunity to work on personal qualifications.

While on deployment, many Sailors had the opportunity to experience new cultures and foreign port calls. Fire Control Technician 3rd Class Tyler Zak, of Doylestown, Pennsylvania, said his highlight of the deployment was a visit to Singapore.

"My friends and I had an awesome time exploring Clarke Quay and the famous Little India neighborhood," said Zak. "We experienced a very different culture and ate all kinds of exotic foods."

Lieutenant Junior Grade James McCarty, of Las Vegas, said his highlight was a visit to Yokosuka, Japan. "I thoroughly enjoyed seeing Tokyo, including the temples, markets and nightlife," said McCarty. "But the single item I will always remember is discovering just how tasty ramen from a vending machine can be."

"For those of us who are new to the submarine force and the Navy, coming home to Hawaii is a culmination of everything that we worked toward," said Kistler. "There is nothing like seeing friends and family and getting a hug and kiss and seeing how kids have grown up."

Monica Cramer, wife of Lt. Dustin Cramer, the weapons officer on Louisville, said she can't wait to have him finally home. "I'm just beyond excited, it is nice to have him back safely and I'm also excited for all the families and especially the children," said Cramer. "We are looking forward to a nice long break and having time to relax."

USS Louisville is the fourth United States ship to bear the name in honor of the city of Louisville, Kentucky. Her mission is to seek out and destroy enemy ships and submarines, and to protect U.S. national interests. At 360-feet long and 6,900 tons, she can be armed with sophisticated MK48 torpedoes and Tomahawk cruise missiles. 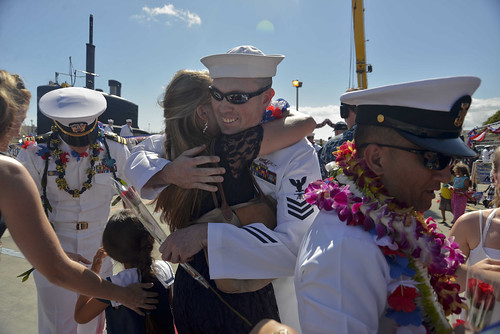