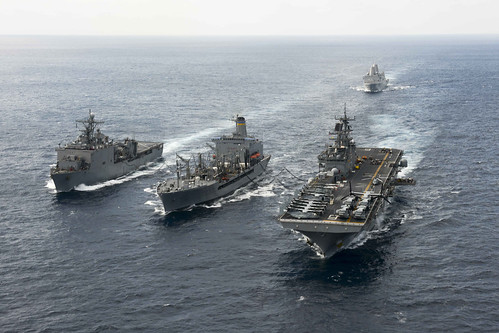 "I can't say enough about how well this great crew responded to get BHR ready for sea and to execute our mission for the U.S. 7th Fleet," said Capt. Joey Tynch, Bonhomme Richard's commanding officer. "The hard work, dedication and commitment to duty of these outstanding young Sailors made this a successful deployment. We arrived on station ready to go and supported several key qualifications and exercises allowing BHR, and our brothers and sisters in the 31st MEU, to remain operationally ready to maintain maritime security and support our foreign allies in times of crisis."

This deployment also marked the first time Green Bay deployed with the ARG as part of the Navy's forward-deployed naval force.

"This was Green Bay's debut as a member of the Bonhomme Richard ARG and our first chance to work with the 31st MEU," said Capt. Kris McCallam, Green Bay's commanding officer. "We had a steep learning curve but quickly stepped up to the challenge, supported the Marines and met our mission requirements 100 percent throughout the patrol."

Throughout the deployment, Bonhomme Richard, Green Bay and Ashland worked hand-in-hand to successfully complete many of their certifications.

"Integrating Green Bay, and the unique operational capabilities they bring to the ARG, was an important step in the continuous improvement of our strong, amphibious presence in the U.S. 7th Fleet," said Capt. Heidi Agle, commodore, Amphibious Squadron 11. "This deployment clearly demonstrated we are ready to respond when called, in peacetime or wartime, with precision and a tremendous ability to coordinate and work together with our allies."

"One of the biggest accomplishments was getting the ship operational after being in the yards for eight months or so back in Sasebo," said Cmdr. Douglas Patterson, Ashland's commanding officer. "Whether it was getting the ship proficient in amphibious operations again or getting our new crew members accustomed to forward-deployed naval forces and how we operate the ship, it was a challenge that we stepped up and met in order to execute our mission."

Bonhomme Richard and Ashland are entering an in-port period in order to prepare for upcoming deployments. Green Bay will continue to maintain an amphibious presence at sea.

The Bonhomme Richard ARG is under the tactical command of embarked Commodore Capt. Heidi Agle and reports to Rear Adm. Hugh Wetherald, commander, Amphibious Force 7th Fleet, based out of Okinawa, Japan.