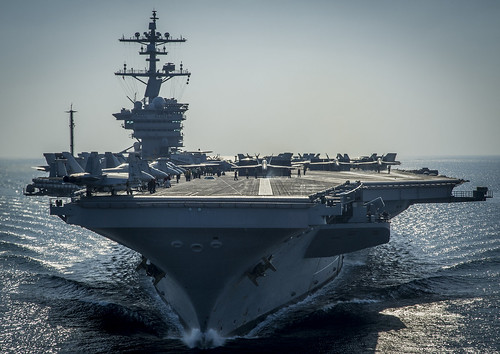 While in the region, CVW 17 successfully flew 12,300 sorties, including 2,383 combat missions, landed more than 9,220 aircraft, and dropped 869 precision guided munitions totaling more than half a million pounds of ordnance.

"These operations contributed significantly to coalition efforts that have blunted the momentum of ISIS, and severely degraded their combat capability," said Rear Adm. Chris Grady, Carl Vinson Carrier Strike Group commander. "Since combat operations began in October of last year, ISIS is no longer able to fight like an army but like a band of terrorists with a corrupt ideology."

After months of demanding operations and long hours each and every day, Capt. Karl Thomas, Carl Vinson commanding officer, expressed his gratitude to the team for their mission-oriented focus.

"Not once did this group of Sailors get complacent while performing the challenging tasks at hand," said Thomas. "They answered every call and performed exceptionally both onboard the ship and out on liberty. I've been thrilled to see great esprit de corps and teamwork across the ship and air wing team."

The Carl Vinson Carrier Strike Group will operate in the U.S. 7th Fleet area of operations en route to its homeport of San Diego.

"I am extremely proud of the men and women who have made sacrifices in support of our county and our Navy," said Grady. "We remain ready to respond to any and all challenges while operating in the 7th Fleet area of operations."