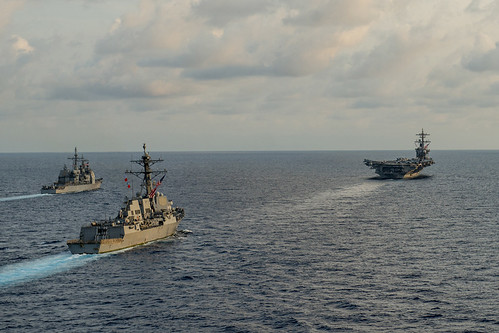 Vinson, now operating in 3rd Fleet, is transiting to her homeport in San Diego following an almost 10-month deployment to the Western Pacific and Arabian Gulf.

"During our time in the 7th Fleet area of responsibility we were able to strengthen the partnership between the U.S. Navy and the Royal Malaysian military," said Rear Adm. Chris Grady, Carl Vinson Carrier Strike Group commander. "The exercises we conducted in the South China Sea enhanced the interoperability of our forces and reaffirms our commitment to the Asia-Pacific region."

Having been deployed for nearly 10 months, some Team Vinson members are set to depart the ship in Hawaii to reunite with their loved ones ahead of the ship returning to homeport. This will assist ship leadership in providing accommodation arrangements for the many crew member friends and family riding the ship from Hawaii to San Diego during the Tiger Cruise.

"Although I would love the opportunity to witness and participated in all the homecoming festivities, I decided to depart in Hawaii and fly home to my family," said Yeoman 2nd Class Tio Lathen. "This is not my first deployment, but has definitely been one of the more rewarding ones. I was able to accomplish a lot and took advantage of the time spent at sea."