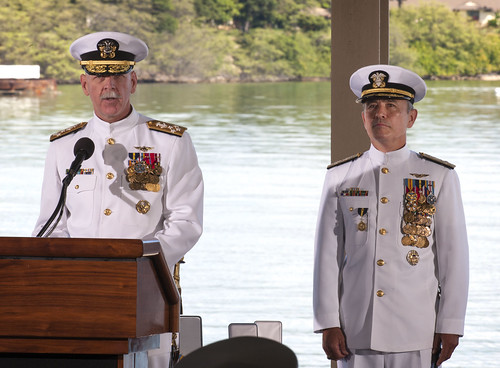 PEARL HARBOR - Adm. Scott H. Swift returned to his home state and relieved Adm. Harry B. Harris Jr. as commander of the U.S. Pacific Fleet during a change of command ceremony on Joint Base Pearl Harbor-Hickam, May 27.

"The magnitude of this moment is not lost on me, especially given my personal and professional history here in Hawaii and the Pacific," said Swift, who became the 35th commander since the Pacific Fleet moved to Hawaii in 1941. "No one is selected for responsibility such as that of the Pacific Fleet based on personal merit or performance alone. It is a reflection of the collective success of many, not one individual, and I am no exception."

Swift also spoke of his fond connection to Hawaii, where he was born when his father was stationed at Pearl Harbor.

Harris said Swift’s Pacific ties made him the perfect officer to relieve him. “There’s no person more suited to be the Pacific Fleet commander than Admiral Swift – former J3 at PACOM, former 7th Fleet commander, and most recently the Director of Navy Staff,” said Harris. “He understands completely both his operational and Title 10 responsibilities. He gets it.”

“He is always ready, and his forces are ready,” Greenert said. “He is always focused on what’s important. He has been a great commander, a warrior and a statesman. In times of crises, we turn to Harry.”

Defense Secretary Ashton Carter joined the CNO in praising Harris for his many contributions to the Pacific Fleet.

“At PACFLT, he helped bring our most advanced capabilities to the Asia-Pacific and shift 60 percent of our naval assets to the region,” Carter said. “He also stressed and maintained the readiness that's at a premium in this dynamic region. For all those reasons and many more, Harry's the PACOM commander we need for the next phase of the rebalance.”

Harris also spoke of the complexities of the Navy's historic role in the region and vowed to continue promoting security, stability, and peace.

"There's no shortage of challenges that confront us,” Harris added. “If called upon, we will fight tonight to defend American interests in the vast Indo-Asia-Pacific. This is not aspirational. It is in our DNA. Our nation deserves no less; our President and Secretary of Defense expect no less."

After reading orders and assuming command, Swift also thanked the men and women of the Pacific Fleet, emphasizing the fact that his success was not accomplished alone. "While my life foundation is my parents, I stand on the shoulders of many," said Swift. 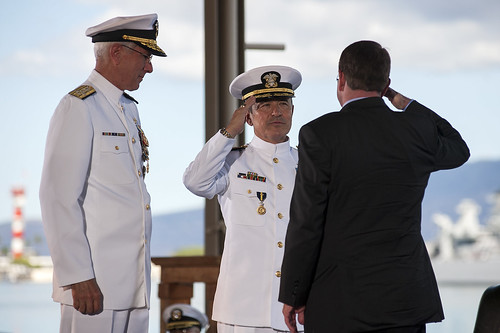 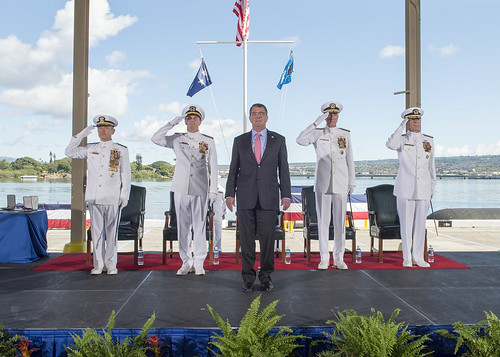