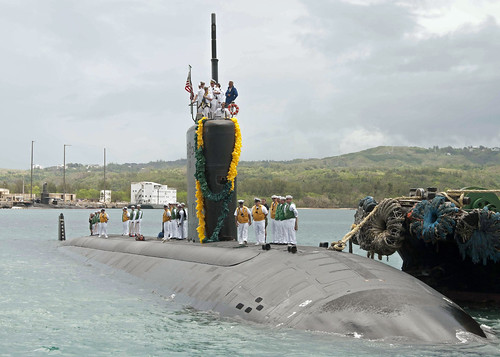 Topeka is the fourth submarine assigned to Commander, Submarine Squadron (CSS) 15 as part of the Navy’s long range plan to put the most advanced and capable units forward. Prior to arriving in Guam, Topeka completed an engineering overhaul at Portsmouth Naval Shipyard, Portsmouth, N.H.

“From bow to stern she has been completely upgraded (and is) the most technologically-advanced submarine we have,” CSS-15 Commodore Capt. Jeffrey Grimes said. “She brings a new level of sophistication and fire power that we need in the Pacific.”

Topeka and its crew were greeted by family members as they filed off the submarine. During brief remarks, Topeka Commanding Officer Cmdr. David Lammers said the Topeka’s arrival would have a positive impact on the local community in terms of economic benefits and security, but that Guam will have a big effect on his crew too.

“Guam is the Navy’s best kept secret,” he said. “Once they get here, you can’t get them to leave.”

In April 2013, then-Deputy Secretary of Defense Ashton Carter announced that a fourth Los Angeles-class submarine would be homeported in Guam in an effort to enhance the Navy’s forward presence as it continues to reposture its forces. The decision to homeport Topeka in Guam brings that vision to fruition.

“This is an overall rebalance of the naval forces into the Pacific, so picking up another naval submarine to Guam gives us more capability to continue to reinforce our partners, provide a level of conventional deterrence and support the ongoing efforts that we have,” Grimes said.

Topeka, commissioned Oct. 21, 1989, is the third ship of the United States Navy named for the city of Topeka, Kan., and is the fourth “improved” Los Angeles-class submarine. Modifications of this class include retractable bow planes, a reinforced sail for under ice operations, vertical launch Tomahawk Cruise Missile capability, ship quieting enhancements, and an integrated combat systems suite.