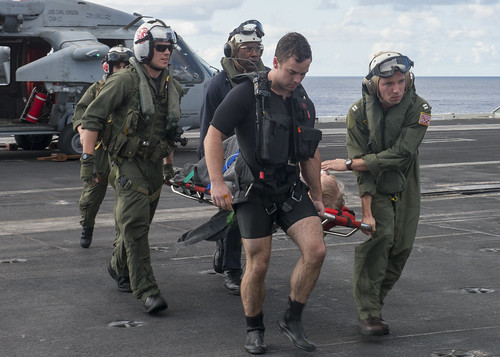 PACIFIC OCEAN -USS Carl Vinson (CVN 70) crew and embarked Helicopter Sea Combat Squadron (HSC) 15 "Red Lions" rendered assistance to a mariner, who had been alone at sea for more than 30 days aboard his 35-foot sailboat, in the Pacific Ocean more than 400 nautical miles off the coast of Honolulu, May 31.

The 70-year-old man is a U.S. citizen making a trans-Pacific transit in his privately-owned vessel.

He is currently receiving treatment from the ship's medical department and is in stable condition. He will be transported from Carl Vinson to San Diego in the next few days pending a medical assessment.

He texted his wife from a satellite phone, and through a series of phone calls involving the U.S. Coast Guard, U.S. Pacific Fleet and U.S. 3rd Fleet, the nuclear-powered aircraft carrier Carl Vinson was directed to his aid.

Within minutes, Team Carl Vinson deployed a group of air crewmen and search and rescue swimmers to assist the mariner.

"When I first heard we were going to assist someone in need, I knew I had to be on my A-game," said Naval Aircrewman (Helicopter) 2nd Class Jarad Angel. "It went extremely smooth. I expected it to be more chaotic, but our training prepared us for this."