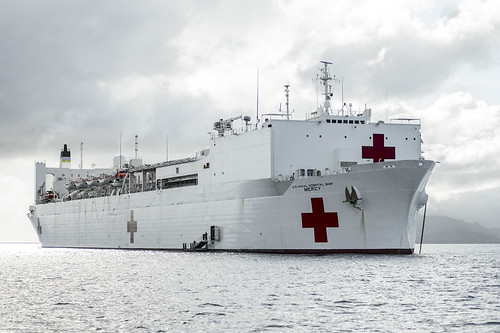 “Natural disasters and manmade incidents continue to threaten the security, stability and prosperity of all nations,” said Navy Capt. Christopher Engdahl, mission commander of PP15. “We are proud of the work we have done together with our host and partner nations to prepare for times of crisis.”

The PP15 team met with the people of Fiji in Suva and Savusavu over the last two weeks to train and exchange ideas. Memebers of U.S. Navy, Australian, New Zealand, Japanese and Canadian forces as well as volunteers from non-government organizations (NGO) spent thirteen days providing medical, dental and surgical care, as well as conducting environmental health surveys.

“Preventive medicine professionals, environmental health, industrial hygiene and entomology personnel had a very large impact on our mission,” said Cmdr. Gregg Montalto, the director of medical operations on Mercy. “Public health subject matter expert exchanges were some of the highlights of our time in Fiji. These included some very important and timely topics, such as tuberculosis programs and dengue control.” While Mercy personnel performed surgeries on the ship, they saw hundreds more at cooperative heath engagements throughout the country, even encouraging those who felt they were beyond help to finally seek it.

About 50 percent of the patients who came to the community health engagement in Dreketi had never been to the local health center, said Dr. Abdul Musheeb-Ibrahim from the Dreketi Health Center.

“I would not have had the chance to make the referrals you have written because they would never come to me. So since they came out to you, we were able to draw them out and I will follow up with them from here because, referrals at the end of the day, will go through me and up to the hospital,” he said.

Primary and subspecialty care providers, nurses, dieticians, physical therapists and audiologists saw 615 patients in Dreketi, 350 in Taveuni and 220 in Nabouwalu. Surgeons on the ship also partnered with and worked alongside ten Fijian surgeons and six surgical nurses to perform 146 surgical procedures and care for more than 589 patients.

“Project Hope volunteers were able to work closely with their Fijian counterparts in subject matter expert exchanges and with the military to provide healthcare and healthcare education throughout Fiji,” said Australian Rose Wilson, Project Hope operations and logistics officer. “Fiji is beautiful, and I thought this was a very successful mission.”

An engineering and construction team of U.S. Navy Seabees, Air Force REDHORSE, Marines, Japan Self Defense Force and Fijian military and civilians built two new classroom facilities for two local schools; one in Viani and one in Wailevu.

“We had to completely level out the ground, compact everything, pour concrete, lay block, pre-fabricate 19 wooden trusses, put the roof on and paint it. The whole gambit of construction from the ground up,” said Builder 1st Class Jeremy Cryer, project manager for the Viani school project.

In addition, more than 300 Pacific Partnership personnel volunteered their off-duty time to assist with 63 community outreach projects, including playing basketball with the Fijian national team, rugby with teams in Nabua and Suva, and face painting with children at a disabled youth center.

“Everyone who attended a community engagement came back speaking of the incredible friendliness and hospitality of the Fijian people,” said Lt. Cmdr. Jen Bowden, lead chaplain for Pacific Partnership 2015. “It was a great visit.”

The U.S. Navy’s Pacific Fleet Band put on 25 performances for more than 14,000 people during the course of the mission visit across 19 engagements. One of the more popular performances was at Suvasuva City Hall, where approximately 2,000 people came out to enjoy the show.

“I would like to thank the people of Fiji for their warm hospitality during our visit,” said Engdahl. “I know I speak for the entire Pacific Partnership team by saying that we made many friends in Fiji, which we hope will last a lifetime.”

Mercy’s next mission stop for PP15 is Papua New Guinea.

Pacific Partnership is in its tenth iteration and is the largest annual multilateral humanitarian assistance and disaster relief preparedness mission conducted in the Indo-Asia-Pacific region. While training for crisis conditions, Pacific Partnership missions to date have provided real world medical care to approximately 270,000 patients and veterinary services to more than 38,000 animals. Critical infrastructure development has been supported in host nations during more than 180 engineering projects.