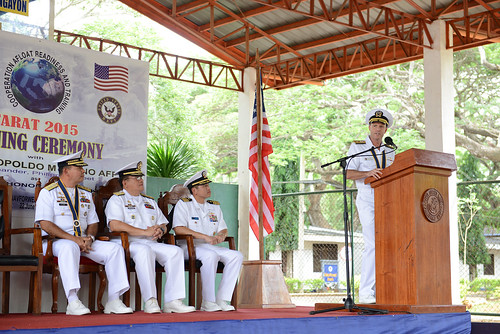 PUERTO PRINCESA, Philippines - Members of the U.S. Navy and Marine Corps along with their Armed Forces of the Philippines (AFP) counterparts kicked off the 2015 Cooperation Afloat Readiness and Training (CARAT) exercise series during an opening ceremony in Puerto Princesa, Philippines, June 22.

The AFP have participated in CARAT since the exercise series began in 1995 and this year's training reflects more than two decades of increasingly sophisticated training ashore, at sea, and in the air.

"CARAT remains a practical way to address shared maritime security priorities, enhance our capabilities, and improve interoperability between our forces," said Rear Adm. William Merz, commander, Task Force 74. "We look forward to operating alongside our Philippine partners as we celebrate the 21st anniversary of the CARAT exercise series."

CARAT Philippines will take place from June 22-26 on the ground in Puerto Princesa and in the waters and airspace of the Sulu Sea. The exercise will focus on combined operations at sea, mobile dive and salvage training, coastal riverine operations, and maritime patrol and reconnaissance and will feature the inaugural participation of littoral combat ship USS Fort Worth (LCS 3) along with rescue and salvage ship USNS Safeguard (T-ARS-50) and forward-deployed P-3 Orion aircraft.

"We are pleased to host our U.S. Navy partners in Puerto Princesa City this year for CARAT Philippines 2015," said Rear Adm. Leopoldo Alano, commander of the Philippine Fleet. "This is a great training opportunity for both nations to gain valuable experience and increase our interoperability."

Now in its 21st year, CARAT is the premier naval engagement in South and Southeast Asia. The bilateral and multilateral exercises provide a regional venue to develop strong maritime partnerships that contribute to the greater peace and stability of the region.

"CARAT is a terrific venue to strengthen our relationship with the AFP and to enhance at-sea readiness through a two-day underway phase," said Capt. H.B. Le, deputy commodore, Destroyer Squadron (DESRON) 7. "Not only is this the first CARAT of 2015, but it's also the first time an LCS has participated in CARAT Philippines. We're looking forward to getting Fort Worth out to sea and operating hull-to-hull with BRP Ramon Alcaraz, BRP Gregorio del Pilar and BRP Apolinario Mabini."