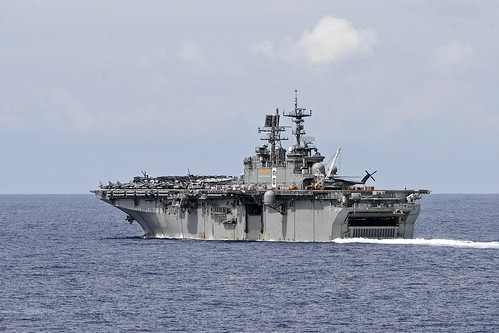 FREMANTLE, Australia - More than 4,000 Sailors and Marines of the four-ship Bonhomme Richard Expeditionary Strike Group arrived in Fremantle and Bunbury June 25 for port visits ahead of the biennial military training exercise Talisman Sabre 2015.

Sailors are eager to take advantage of the local attractions, shopping and restaurants in in both locations. Some of the activities they will enjoy during their liberty include visiting many of the local beaches, touring the local wineries and viewing some of the local wildlife while participating in the many tours offered by Morale, Welfare and Recreation (MWR).

“I definitely want to see some of the animals you can’t see in America, koala and kangaroos,” said Hull Maintenance Technician 3rd Class Rachel Wood, a Bonhomme Richard Sailor. “When I joined the Navy I definitely wanted to see Australia.”

“We are getting ready to train with the Australian military and the perfect start is a port visit to Fremantle,” said Cmdr. Jeffrey Heames, Preble's commanding officer. “We’ve had allies and partners in this region for over 70 years, and we only look to strengthen those relationships."

Capt. Kristy D. McCallum, Green Bay's commanding officer, said Talisman Sabre will provide Sailors and Marines an opportunity to take their skills to the next level and "not only provides the challenge of a new area of operations, but also the opportunity to exercise alongside U.S. partners and to integrate into a larger force.”

In addition to the rest and relaxation during port visit, Sailors and Marines will volunteer their time and services at a local animal park and a neighborhood school.

“We're here to come alongside and work together with local students and side-by-side with young Australian Naval Cadets and Australian Army Reservists, to accomplish some goals within the local community" said Cmdr. Curtis Price, Bonhomme Richard's chaplain. "We have a lot in common with one another and it's all about fostering and building upon those commonalities.”

"The crew knows how lucky they are to be able to represent the Navy and the U.S.," McCallum added. "I have no doubt they will accomplish their 'liberty' mission with the same professionalism.“

Cryptologic Technician 2nd Class Jacklyn Maher is one of many Sailors aboard Preble looking forward to getting involved in community service activities during the ship’s visit to Freemantle.

“I’ve signed up for nearly everything, I couldn’t be more excited," she said. As a Cryptologic Technician, I had a pretty lengthy “A” school, about a year and a half. I’m happy to finally be in the fleet, making an impact in the Navy, and also in communities around the world.”

Bonhomme Richard has been underway since June 1, conducting exercises in the U.S. 7th Fleet area of operations. Since leaving Sasebo, Japan, the Expeditionary Strike Group has completed a vast array of certification exercises, from detect and engage to underway replenishments.