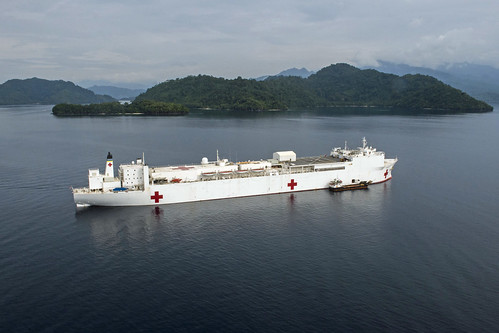 While in Arawa, PP15 personnel will work and train side-by-side with the community on civic service events, women's leadership and safety topics, medical and veterinary care.

"In Papua New Guinea, we are providing medical and dental services, in collaboration with the host nation and at their invitation," said Capt. Melanie Merrick, the commanding officer of the medical treatment facility onboard Mercy. "We're working alongside providers, including doctors and nurses in the hospitals and clinics. We're able to do some subject matter exchanges with those providers and also with the administrators of those hospitals, as we bring repair technicians, laboratory and pharmacy capabilities as well...to help the country prepare in calm for potential crisis in the future."

Also, the Mercy crew will work in conjunction with the U.S. Embassy in Port Moresby and the host nation government to host several engagements focusing on women's health and violence prevention.

"We want to emphasize the key themes of participation, protection and partnership," said Royal New Zealand Air Force Wing Cmdr. Jennifer Atkinson, the chief of staff for this year's Pacific Partnership mission. "We're looking at ways we can work with the host nation to empower their women, and in response we are supporting workshops on both gender-based violence prevention and family violence prevention."

"The work that is already being done and the work we are set to do is all very exciting. I personally look forward to meeting and working with the Arawa community leaders, and I know our personnel are eager to visit Papua New Guinea and work alongside the community to tackle these very important projects for the people of Arawa," said Capt. Christopher Engdahl, Pacific Partnership 2015 mission commander. "We are tailoring every event, at the host nation's request, to ensure each of these events supports the people of Arawa, and also helps us learn from their professionals and community leaders. We know that the best way for all of us to be ready for a crisis is to work together now before a disaster occurs."

To accomplish so many events during the seven-day stay in Arawa, Pacific Partnership will have a larger footprint this year than in previous visits to Papua New Guinea. The hospital ship arrived with more than 900 personnel, including volunteers from eight non-governmental organizations and the U.S. Agency for International Development.

PP15 participants on the ship and on the ground include personnel from the United States, Australia, Timor Leste, Japan, and New Zealand. All PP15 personnel will work collectively with the Papua New Guinea government and local community on the various medical, dental, veterinary and engineering civic action projects.

"Mercy has been to Papua New Guinea before, in 2008 and in 2013," said Royal Australian Navy Capt. Brian Delamont, Pacific Partnership's deputy mission commander. "So the local communities can expect to see some of the same events and equipment, such as our two helicopters that will be transferring personnel and supplies. Sometimes the helicopters will be flying low over villages, but it will all be done very safely."

The Mercy crew is scheduled to work in Arawa through July 3, when the ship and crew will move to their next port of call in Rabaul, Papua New Guinea. 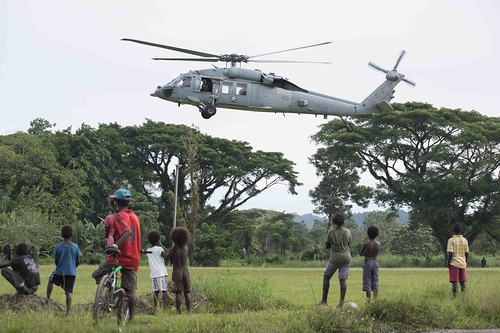