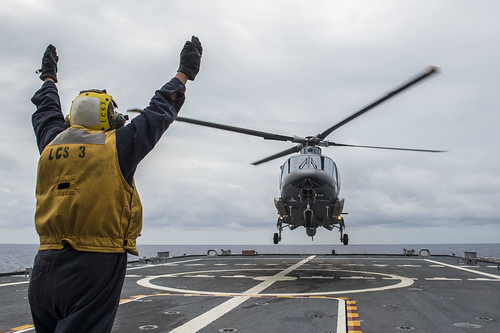 A Philippine Navy helicopter lands aboard the littoral combat ship USS Fort Worth (LCS 3) in the Sulu Sea during the at-sea phase of CARAT Philippines. (U.S. Navy/MC2 Joe Bishop)

“The exercise this week with our Philippine navy counterparts reflects more than two decades of increasingly sophisticated training,” said Capt. Fred Kacher, commodore, Destroyer Squadron (DESRON) 7. “The underway phase in particular was a huge success and it’s clear to me that we have taken lessons learned from past CARATs to increase the complexity of this year’s exercise.”

The Armed Forces of the Philippines (AFP) have participated in CARAT since the exercise series began in 1995.

“I am indeed very happy to note that CARAT 2015 has been the manifestation of more than 20 years of training ashore, at sea and in the air,” said Philippine Navy Vice Adm. Alexander Lopez, commander, Western Command. “The training activity each year comes with more and more sophistication, especially with the participation of the littoral combat ship USS Fort Worth.”

“We’re very excited about the capabilities the littoral combat ship brings to the region,” said Kacher. “LCS is a wonderful fit for Southeast Asia and the ship is the future face of CARAT and U.S. Navy engagement in the region.”

The exercise series promotes regional maritime cooperation with many participating navies. CARAT Philippines kicked off the 2015 series, with an additional eight exercises to be held in Singapore, Indonesia, Malaysia, Thailand, Bangladesh, Brunei, Cambodia and Timor-Leste throughout 2015.

See photos from the exercise in the U.S. Pacific Fleet Flickr stream.