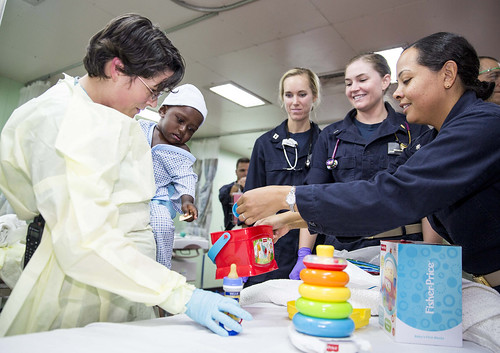 ARAWA, the Autonomous Region of Bougainville, Papua New Guinea - The hospital ship USNS Mercy (T-AH 19) returned six patients to Arawa July 1, including an 18-month-old infant, whom the ship’s helicopter rescue team retrieved the previous day from a small land mass off the coast of Carteret Island in Papua New Guinea.

Mercy Helicopter Squadron Command 21, the Blackjacks, flew the patients to the Buka Airport in Bougainville this afternoon. Personnel from the Mercy escorted the group to meet with the local disaster coordinator and reunite them with their families.

The Deputy Chief Secretary of the Autonomous Region of Bougainville, Papua New Guinea contacted the U.S. Embassy in Port Moresby to request assistance transporting the civilians who were survivors of a small vessel reported lost at sea June 27.

The survivors swam ashore to Han Island where the Mercy helicopter later retrieved them.

Mercy is currently in Papua New Guinea for its second mission port of Pacific Partnership 2015. Pacific Partnership is in its tenth iteration and is the largest annual multilateral humanitarian assistance and disaster relief preparedness mission conducted in the Indo-Asia-Pacific region. While training for crisis conditions, Pacific Partnership missions to date have provided real world medical care to approximately 270,000 patients and veterinary services to more than 38,000 animals. Critical infrastructure development has been supported in host nations during more than 180 engineering projects.