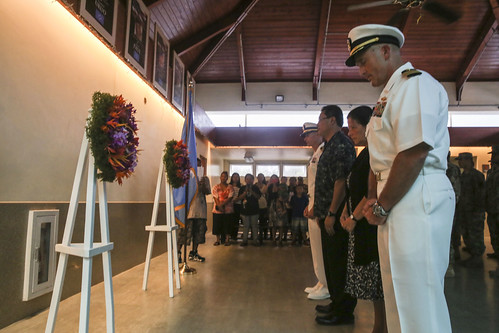 The ceremony honored the men and women of Micronesia who gave their lives in service to the United States of America.

Approximately 40 veterans, their families, and the families of fallen service members attended the ceremony.

“This is not just a remembrance of those who have fallen, but for all veterans,” said Commodore, Task Force Forager, Capt. James Meyer. “When I arrived in FSM, I visited with some veterans and heard their compelling stories. I want to recognize their service and honor those who gave their life in defense of our freedom.”

The United States shares a special and unique friendship with the Federated States of Micronesia.

"This was a really special way to honor our men and women who have served and given their lives," said Sunijiah Joel, a former Army Sgt. "It made us feel very special to be invited to the ship to meet with service members and tour a big ship. Many of us have never had that experience before."

Many Micronesian men and women have served or are currently serving in the U.S. armed forces.

“We stand here today to recognize and pay tribute to the men and women that paid the ultimate sacrifice to our country in defense of our way of life,” said Commander, Navy Expeditionary Forces Command Pacific, 7th Fleet, Capt. Erich Diehl. “This ceremony is a testament that their sacrifice will never be forgotten. It is a powerful reminder of the bravery, honor, courage and commitment to a greater cause that each and every one of them paid. To our fallen heroes, let them never be forgotten.”

Following the ceremony, the veterans and their families were invited to a meet and greet with Task Force Forager service members aboard the Military Sealift Command joint high speed vessel USNS Millinocket (JHSV 3).