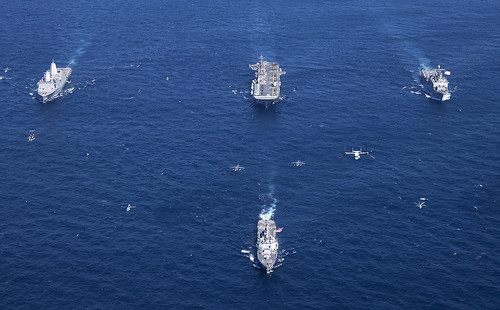 INDIAN OCEAN - The opening ceremonies for Talisman Sabre 2015 were completed in Darwin, Australia, July 5, as Expeditionary Strike Group Seven (ESG 7) is underway with Sailors and Marines and embarked Australian military preparing for the high-level amphibious training taking place over the next two weeks.

Talisman Sabre is a U.S. and Australian-led Combined Task Force operation preparing our militaries for crisis action planning and execution of contingency operations. It is designed to maintain a high level of interoperability between U.S. and Australian forces, demonstrating their commitment to a military alliance and regional security. The exercise also supports increased flexibility and readiness.

"I am excited for the opportunity to work with our Australian and New Zealand partners and integrate them into the strike group," said ESG 7 commander, Rear Adm. Hugh Wetherald. "Along with (USS) Preble joining the ESG as the Air Warfare Commander, we have the Royal Australian Navy Fleet Battle Staff embarked aboard Bonhomme Richard as the Surface Combat Commander bringing their considerable skill and expertise in surface and subsurface warfare areas."

Combined operations also allow personnel in similar fields of expertise to exchange ideas and improve knowledge and proficiency in both countries.

“I think it’s really important to have our forces working together because we are close allies and a lot of what we do is similar,” said Combat Systems Operator for the Royal Australian Navy, Able Seaman Holly Bird, from Albany, Western Australia. “It helps me go back to my ship and utilize what I have learned here to progress our ships, so I think it is really important.”

The ship will fight in all areas of naval warfare during the exercise. Scenarios will be conducted in air warfare, surface warfare, anti-submarine warfare, and the culminating event being an amphibious landing ashore.

“We hope to learn more about the Australian's capabilities and how well they, and we, are able to flex in order to work together during joint activities,” said Lt. Doug Ivey, tactical action officer onboard Bonhomme Richard.

“My goal as a watch stander,” Ivey added, “is to improve the proficiency of my team by interacting with other forces. It is one thing to practice and already know how your watchstander on the other side of combat will react, but being able to exercise with an new people adds to the complexity of the scenario.”

In addition to the 3,000 Sailors and Marines onboard Bonhomme Richard, 27,000 more U.S. and Australian service members will participate in the bilateral exercise through June 19. 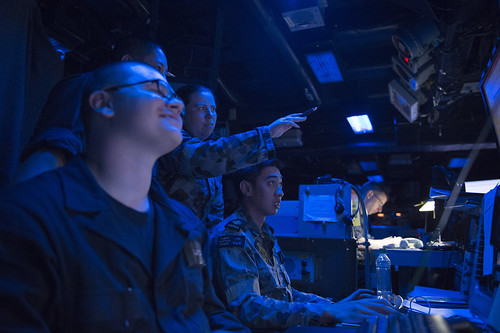