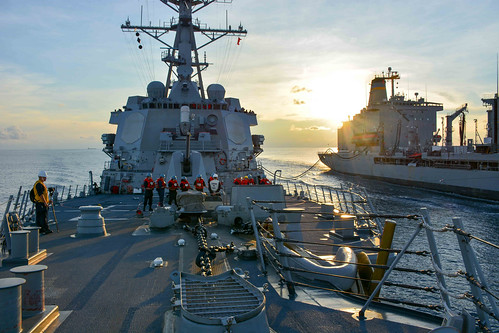 SOUTH CHINA SEA - The Arleigh Burke-class guided-missile destroyer USS Lassen (DDG 82) continues to patrol the South China Sea since the end of May 2015 in support of security and stability in the region.

“It is a unique opportunity for Lassen to read about U.S. defense policies which affect the region and then be called to the tip of the spear to execute these policies,” said Lassen’s commanding officer, Cmdr. Robert Francis. “These are priceless lessons for our young junior officers, and will undoubtedly shape them into the skilled mariners who will one day lead our Navy.”

Additionally, Lassen assists U.S. Navy aircraft with safety of flight through the area. These aircraft have been queried throughout their flight, and these queries have become ordinary as the U.S. Navy conducts patrols in the South China Sea, a major sea line of worldwide communication for commercial shipping traffic.

Operations Specialist 2nd Class Ashley Smith runs the air controller console on board Lassen. As an air controller, she is one of the personnel responsible for the safety of flights. She sums up the experience as “this is just another day at work in South China Sea.”

On board Lassen, in clear and perfect English, it is common to hear Chinese voices over the radio in the combat information center. Lassen conducts daily flight operations with her two embarked MH-60R Seahawk helicopters, assigned to Helicopter Maritime Strike Squadron (HSM) 51, also known as the “Warlords.” During these flights, Warlords are often queried by the Chinese. The pilots on the helicopter respond in a professional manner by reiterating they are operating in international airspace in accordance with international law.

Lassen, part of the Forward Deployed Naval Forces in Yokosuka, Japan, and assigned to Destroyer Squadron 15, is on patrol in the 7th Fleet area of operations in support of security and stability in the Indo-Asia-Pacific.