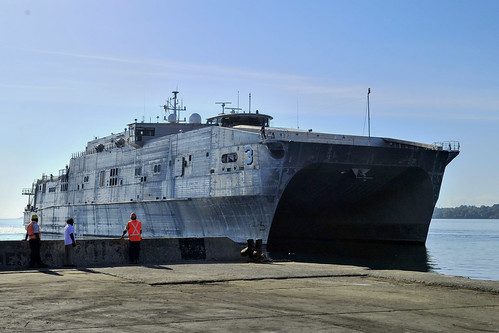 “The service members aboard the Millinocket are bringing a wealth of knowledge and numerous skill sets to the Solomon Islands,” said Lt. Col. Gregory Malone, the deputy commander of Task Force Forager. “From renovating schools to providing useful information to their medical professionals, I believe it will be a reciprocal learning experience for everyone involved.”

Medical teams will be providing care in specialty areas such a dentistry, optometry, obstetrics and gynecology, and veterinary care.

“We look forward to standing shoulder-to-shoulder with our counterparts as we conduct patient care together, thereby passing knowledge and learning from them as much as they might learn from us,” said U.S. Army Maj. Chris Caldwell, the medical task force executive officer. “We will also take advantage of any opportunity to provide lectures, discussions, demonstrations, and seminars.”

“We are going to be working at the Vura School,” said Chief Steelworker Bradley Vanhorn, engineering assistant officer in charge, from Amphibious Construction Battalion 1. “We are going to install new doors and windows, electrical outlets and lighting, and install a new roof. None of the buildings are painted, so this is going to give the school a huge facelift.”

In another building at the school, the engineers will demolish a bathroom, repairing handrails and painting.

“Walking into a school that looks nice is going to be great for the kids,” said Vanhorn. “The kids are very interested in everything we are doing out there.”