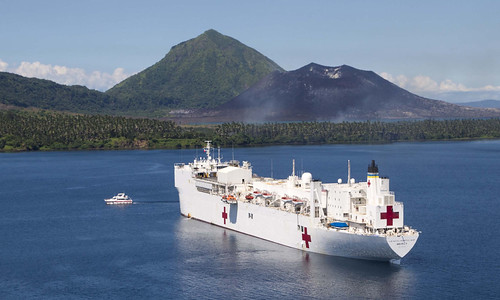 The mission was conducted in two locations – the town of Arawa, in the Autonomous Region of Bougainville, and in and around the city of Rabaul, in the province of East New Britain.

“We were happy to work side-by-side with our host nation partners to continue our collective ability to be ready in times of disaster,” said Navy Capt. Christopher Engdahl, mission commander of PP15. “I think I can speak for all of us when I say we made new friends in Papua New Guinea, and we appreciate the warm welcome we received from the people here.”

The PP15 team worked with the residents of Papua New Guinea in Bougainville and East New Britain to train and exchange ideas. Members of the U.S., Australia, New Zealand, Japan and Timor Leste military forces, as well as government and non-governmental organizations (NGO) also provided medical, dental and surgical care to area residents, and conducted subject matter expert exchanges both on and off the ship.

The Pacific Partnership team also worked with the U.S. Embassy in Port Moresby to conduct nine engagements in the surrounding communities focusing on women’s health and violence prevention issues.

“The ability to tackle sensitive topics like family violence was notably dependent on how well PP15 participants were able to build rapport and engage the community participants,” said New Zealand Air Force Wing Cmdr. Jennifer Atkinson, the Pacific Partnership 2015 chief of staff. “The events all had very good levels of engagement, and feedback from the host nation indicated that they received significant value from both information shared and learned. It was very evident from the warm response throughout the events that they were both appreciative and happy to have these events coordinated. There were also comments from the host nation regarding the benefit of how the workshops and symposium brought community members together, which would not usually happen.”

“We were extremely excited to work alongside our host nation medical providers, veterinarians and engineers to bring services to the people of Papua New Guinea,” said Capt. Melanie Merrick, the commanding officer of the medical treatment facility USNS Mercy. “It was an amazing experience, and our personnel learned so much from working together with the people of PNG.”

Working in local hospitals, clinics, and even flying via U.S. Navy helicopter to remote regions of the country, primary and subspecialty care providers, nurses, dentists, and optometrists saw over 6,000 patients at cooperative health engagements throughout the two regions. The direct care allowed medical professionals to build relationships in the local communities and better understand the conditions in Papua New Guinea, which help partner nations plan and be better prepared for times of crisis.

Physicians and nurses also taught more than 50 hours of instruction in medical and nursing-related topics. Of particular note, dental teams were able to raise awareness about the potential medical dangers of a local custom.

“From our feedback, the most valuable contribution we made was to the awareness of the ill oral health caused from betel nut chewing, which includes oral cancer, periodontal disease, and gross wear,” said Lt. William Arden, a Navy dentist aboard Mercy. “Many patients had never been told about the dangers of betel nut and were very appreciative of hearing our education piece about it.”

Additionally, engineering and construction teams made up of U.S. Navy, Air Force and Marine Corps, Australian, and Timor Leste military began construction on two classroom facilities for two schools in Bougainville; one in Piruana and the other in Tupukas. The buildings, which aren’t scheduled to be completed until the end of July, will also double as emergency shelters for the local community during times of disaster.

“The purpose of the building is an assembly hall for the students,” said Cpl. Daniel Kleesman, with the Royal Australian Engineers, working on the Tupukas school project. “In recent times, [the student body] has upped its size from 300 to 500 students, so they needed a bigger building to house them for school assembly.”

“If natural disasters were to hit [this area,] this would be their location to come and rally up for the community,” said Lt. j.g. Brittni King, the officer in charge of the Seabee detachment from Amphibious Construction Battalion One. “It also gives them a better structure to learn out of.”

“Traveling further away from the pier in Arawa took us to schools where the children had met few, if any, Americans,” said Lt. Cmdr. Jen Bowden, lead chaplain for Pacific Partnership 2015. “We were greeted with a bit of skepticism that quickly turned to excitement and welcome, as we pulled out sports equipment and began to connect through games that everyone recognized such as soccer and rugby. In Rabaul, the volunteers were greeted by hundreds of children and families that came out during the school holiday to sing and play sports with Mercy personnel. In each instance, it was hard to leave and everyone had a great time. All of the volunteers spoke about how meaningful the visits were and the great memories they took away from Papua New Guinea.”

The U.S. Navy’s Pacific Fleet Band was also a big hit with the residents of East New Britain and Bougainville. The band put on 23 performances for nearly 15,000 people across the two mission locations. At Kokopo Market in East New Britain, approximately 2,000 residents turned up to dance with service members and enjoy the concert.

“At first, I think they were trying to wrap their heads around these people in uniforms with instruments,” said Musician 2nd Class Andrea Sematoske, with the Pacific Fleet Band. “They had never seen the instruments we were playing. But after a while, they wanted to dance and interact with us and shake our hands. The reaction from the kids was incredible. It was totally worth the work that went into it to see the kids and their smiles.”

The U.S. Army’s embarked civil affairs team also assisted with the delivery of more than eight tons of donated goods and supplies from government and non-governmental organizations.

“This mission represents the strong relationship between Papua New Guinea and the United States and the other partner nations,” said Walter North, the U.S. Ambassador to Papua New Guinea. “Pacific Partnership’s goal is to build capacity within partner nations, so that when disaster does occur, which is, unfortunately, likely to occur in this region, that we know each other already. We know how each other works, we know our strengths, and areas where we can improve. And so when we come together, we can serve people with better abilities.”

On June 30, during the mission stop in Arawa, the Pacific Partnership team responded to a real-world event in which Mercy received a request for search and rescue support from the Chief Secretary of the Autonomous Bougainville Government through the U.S. Embassy in Port Moresby. Three days earlier, six injured residents had been lost at sea and eventually swam ashore to Han Island. After receiving the request for assistance, the Mercy sent its MH-60S Sea Hawk helicopter from Helicopter Sea Combat Squadron 21 to retrieve the injured, including an 18-month old infant, and the search and rescue crew transported the injured residents to the ship for immediate care. After staying on board overnight for care and observation, the patients were discharged and transported ashore July 1. All were assessed to be in good condition, according to Capt. Merrick.

“Anytime we are in a position to help those in need we will respond with our best effort,” said Engdahl. “We are glad we were able to assist getting these residents back to shore safely and return them to their families.”

Mercy’s next mission stop for PP15 is the Republic of the Philippines.

Pacific Partnership is in its tenth iteration and is the largest annual multilateral humanitarian assistance and disaster relief preparedness mission conducted in the Indo-Asia-Pacific region. While training for crisis conditions, Pacific Partnership missions to date have provided real world medical care to approximately 270,000 patients and veterinary services to more than 38,000 animals. Critical infrastructure development has been supported in host nations during more than 180 engineering projects.