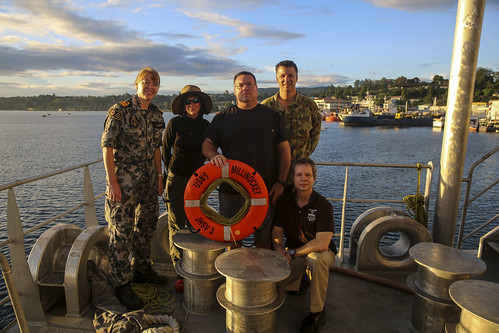 HONIARA, Solomon Islands - The quick reactions of personnel from Pacific Partnership and the Military Sealift Command joint high speed vessel USNS Millinocket (JHSV 3) saved the life of a man who was drowning in the waters near the ship July 10.

After arriving in port earlier in the day, three civilian mariners, Frederick Beck, Daniel Claycomb and Shannon Alves, noticed a semiconscious man floating in the water, unable to keep himself afloat.

“We saw some splashing in the water after one of the ferry boats had went by,” said Beck. “We immediately alerted the medics and attempted to keep him afloat.”

The crew quickly threw him a life buoy to try to pull him from the water.

“We had to drag him while he was on the buoy around the ship to the pier,” said Claycomb. “If it were not for us throwing that out there, he would have drowned.”

Noticing the unfolding event on the pier, Australian Army Lt. Col. Rodney Petersen and Australian Navy Lt. Cmdr. Alison Zilko, quickly ran to the pier and, with help from the ship’s crew, successfully pulled the man from the water. Zilko then began administering medical treatment.

“This man was very lucky to have been noticed by the Pacific Partnership 2015 personnel and ship’s crew,” said Zilko.

According to Petersen, the man was only minutes away from dying if not for the quick actions of the crew.

The man survived and was taken away for further medical treatment.