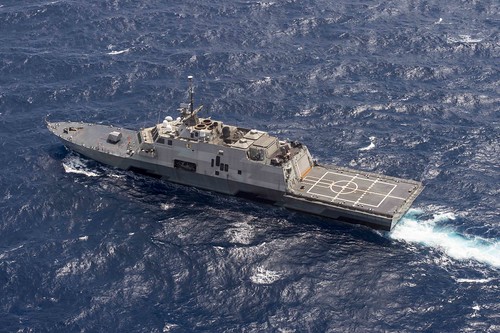 "Our presence operations with USS Lassen demonstrates the U.S Navy's commitment to the Indo-Asia-Pacific region and emphasizes our ability to conduct maritime operations freely on the high seas," said Cmdr. Rich Jarrett, commanding officer of Fort Worth. "The 16-month deployment rotation for littoral combat ships like USS Fort Worth provides persistent presence that contributes to maritime stability throughout the region."

During combined presence operations in the South China Sea, Fort Worth and Lassen conducted joint maneuvering exercises at sea, working together to seamlessly share information between the two platforms.

"It's truly an honor to be part of the first joint presence operations in the South China Sea between an LCS and DDG," said Cmdr. Robert Francis, Lassen commanding officer. "Lassen and Fort Worth complemented each other operationally, and the crews learned many great lessons that we will share with the fleet."

"LCSs are accustomed to independent steaming so sailing with Lassen was a welcomed change to our daily routine at sea," said Cmdr. Christopher Brown, prospective commanding officer of Fort Worth. "The operating picture shared between both ships proved invaluable in increasing our situational awareness."

Presence operations also provide U.S. Navy ships the opportunity to practice the Code for Unplanned Encounters at Sea (CUES) with other nations' ships operating in the region. Since the CUES agreement was established in April 2014, Fort Worth, Lassen and other U.S. Navy ships have been using CUES to formally communicate maneuvering intentions with ships from other navies to minimize the risk of miscalculations at sea.

"Codified formal communications really do help eliminate miscommunications and clarify intentions between units," said Brown. "We use both CUES and plain voice on the marine VHF (very high frequency) radio to communicate with other ships operating in this region." 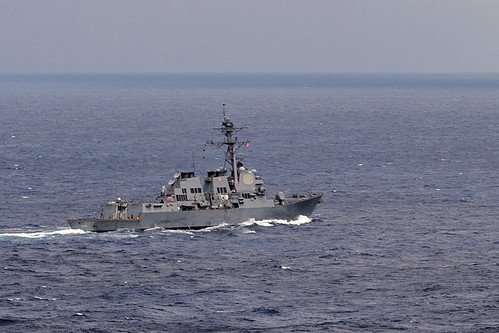