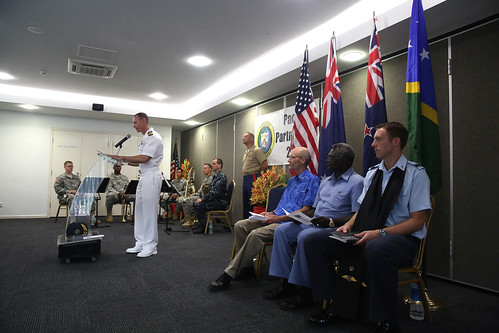 HONIARA, Guadalcanal - Building and sustaining relationships was the underlying theme of the opening ceremony of the Pacific Partnership 2015 mission in Solomon Islands, July 13.

“The relationship between our two countries goes back since the Second World War,” said Solomon Islands Prime Minister Manasseh Sogavare. “I acknowledge the courage and bravery of allied troops along with the local scouts and coast watchers. They fought side-by-side for a more peaceful world in which their younger generations could grow and prosper.”

Sogavare added, “I believe that the values and principles for which they fought are ones that our people in the present age also aspire to live under. In this connection I continue to acknowledge the United States for continuing to make the world a better place to live.”

Further emphasizing the long-standing relationship the two countries have shared, U.S. Ambassador to Solomon Islands Walter North spoke to the people of the Solomon Islands about the shared issues both nations face.

“Solomon Islands and the United States have enjoyed a close relationship since your independence in 1978,” said North. “Our two nations have grown closer in recent years, working together on issues such as adapting to the impacts of climate change, combating deforestation and rural poverty, and spurring economic development.”

North also noted he is excited the Solomon Islands is hosting Pacific Partnership 2015 because it allows for further collaboration on disaster response preparedness.