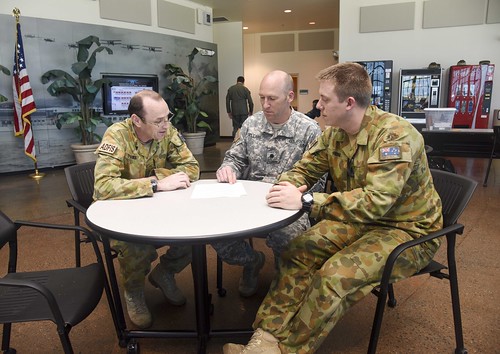 PEARL HARBOR, Hawaii - As tens of thousands conduct military training in Australia during Talisman Sabre 2015 (TS15), a combined American-Australian team of nearly 2,500 is working behind the scenes to ensure the exercise is as realistic as possible.

Talisman Sabre is the largest bilateral exercise between the U.S. and Australia, and is designed to train U.S. Pacific Command units and the Australian Defence Force in planning and executing combined and joint military operations on land, air and sea.

While the majority of the TS15 effort is taking place in and around the Australian continent, the combined exercise control group (CECG), located on Ford Island, is coordinating the efforts of multiple satellite control groups in the continental U.S., Australia and other locations in the Asia-Pacific region.

"These men and women from our two nations play a critical role in the safe training of our forces," Jolliffe said. "This exercise has been two years in the planning and this is the moment when all of that hard work comes together."

The team in the CECG performs a variety of tasks to keep the forces being trained on their toes; from assessing simulated battle damage, to roleplaying personnel from different commands. There is a group within the CECG who represents the "opposing force" and decides where enemy ships and troops move to counter the exercise participants.

The training audience reacts to, and tries to anticipate, prompts that come from the CECG, as they would for real world situations. The goal is to respond to the scenario the same way they would to an actual situation allowing them to achieve realistic training.

"Our aim at the CECG is to make the training as realistic as possible. If we are doing our job right, our presence is all but invisible to the forces being trained," Spedding added.

Talisman Sabre is a biennial land, sea and air military training exercise between U.S. and Australian forces. This year the exercise features more than 29,000 personnel, 21 ships, 200 aircraft and three submarines, which increases U.S.-Australian interoperability to respond to a wide variety of contingencies and maintain security, peace, and stability in the Indo-Asia-Pacific region.