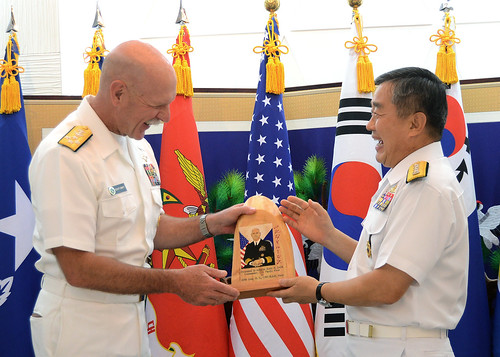 During the two-day visit, Swift met with leaders from both the U.S. and the Republic of Korea, to include the Honorable Mark Lippert, U.S. ambassador to the Republic of Korea, Adm. Jung, Ho-sub, ROK chief of naval operations, Adm. Choi, Yoon hee, ROK chairman of the Joint Chiefs of Staff, and Gen. Park, Seon-woo, deputy commander of the Combined Forces Command, to discuss the strength of the alliance between the U.S. and ROK.

"The United States and Republic of Korea navies have a long and storied history of working together," said Swift. "The stability throughout the Indo-Asia-Pacific region is directly related to the strength of our alliance and I am committed to ensuring our strong partnership continues.”

Swift also emphasized the strength of the Pacific Fleet and assured ROK leaders the stability of the region is one of his top priorities.

"The only navy that is more powerful than the Pacific Fleet is the U.S. Navy ... So I am very confident that despite the uncertainly on the peninsula within the maritime domain we are fully prepared to support Gen. Scaparrotti and Chairman Choi and do whatever may be necessary as of the present and future."

Swift also thanked the people of the ROK for their support of U.S. Navy forces who are forward-deployed on the Korean peninsula.

"It was no accident that one of my first stops during this trip was to the Republic of Korea,” said Swift. “The support we (U.S. Pacific Fleet) receive from the people here helps ensure we are able to remain forward-deployed where it matters, when it matters."