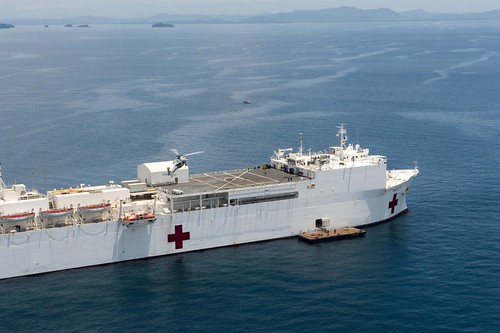 “Being compassionate and helpful is natural to human beings,” said the Honorable Victor A. Tanco Sr., governor of the province of Capiz, during a reception held aboard Mercy. “So despite diversities and differences, there is always a place in our hearts for others and especially to those who have less in life. Maybe our differences are God’s way of reminding us not to be selfish, and instead to share our countless blessings with others. I’m referring to Pacific Partnership 2015 serving as a true example of excellence in humanitarian service.”

The mission in Roxas City saw an increase in the number of partner nations involved in the mission, with Japan, Korea and Malaysia joining the U.S., Australia, New Zealand and the Philippines.

“For our dentists this was probably one of the ports with the best partnering in terms of having the most number of partner dentists that [our personnel] worked with,” said Mercy’s Director of Surgical Services Cmdr. Marion Henry. “They brought partners on board to the dental clinic here on Mercy, and taking care of patients together working side-by-side there was a high level of partnership and exchange.”

“Similarly in the operating rooms we had not just Philippine surgeons, but we had a large number of surgeons from our other partner nations. We had Japanese and Koreans working with us so that almost every surgical procedure had a multinational surgical team there,” said Henry. “Additionally, the Filipino nurses who came on board to be our translators and to work with us in all areas were extremely helpful and very involved. They had a high level of nursing skill and medical knowledge, so they were a delight to work with.”

“Your sincerest endeavors reflect that we do not have to be in office to render assistance to others,” Tanco said. “Rather, we only have to be emphatic and show our love and compassion through utmost dedication and earnest commitment in service. Your humanitarian assistance which primarily reached the less fortunate Capizenos, made a difference in their perception of life because of your commitment to uplift the lives of others. You motivated us to hope, to dream, and to realize the beauty of sharing and loving as well as it inspired us to have a positive outlook on life. As this mission draws to a close, the provincial government of Capiz would deeply like to thank you for being a partner in this mission to uplift the people of Capiz.”

Mercy will continue to its next mission stop in Subic Bay, Philippines, and then proceed to Vietnam.

Pacific Partnership is the largest annual multilateral humanitarian assistance and disaster relief preparedness mission conducted in the Indo-Asia-Pacific region. While training for crisis conditions, Pacific Partnership missions to date have provided medical care to approximately 270,000 patients and veterinary services to more than 38,000 animals. Additionally, PP15 has provided critical infrastructure development to host nations through the completion of more than 180 engineering projects.