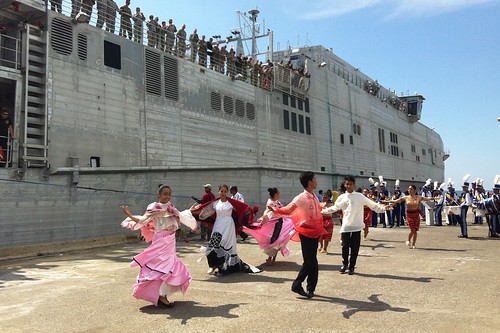 “We look forward to working with and learning from our host country partners,” said Lt. Col. Greg Malone, deputy commander of Task Force Forager. “Pacific Partnership 2015 is about sharing best practices and learning about cultural differences. Our stay in the Philippines will no doubt be enjoyable and we hope to leave behind enhanced capabilities as well as a better understanding of the people of the Philippines.”

The Medical Task Force on board Millinocket is comprised of 20 medical disciplines including dentistry, optometry, obstetrics and veterinary care.

“Our Community Health Outreach Teams, made up of Army and Navy doctors, nurses, dentists, and optometrists, will travel to selected barangays in San Fernando City and San Gabriel with the mission to help build medical capabilities in the outlying clinics and provide services to those in need,” said Army Col. Christensen Hsu, commander of the Task Force Forager medical team.

The engineering team is composed of Seabees from Amphibious Construction Battalion (ACB) One and ACB-2, and Marines from the 7th Engineer Support Battalion. They will assist Naval Mobile Construction Battalion Five in the renovation of Boy-Utan and Eulogio elementary schools and Caba High School during their mission in the Philippines.

"Our partnership will reach far beyond our time with the children. What they will take away is the memory of their military forces working alongside U.S. service members to invest in their future," said Lt. j.g. Nicolaas van Wyngaardt, officer in charge of Naval Mobile Construction Battalion Five detachment.

The Army/Navy Joint Band under the direction of U.S. Pacific Fleet Band, will perform in multiple locations throughout San Fernando City.

“Our band will be performing at community relations and ceremonial events all throughout San Fernando City,” said Musician 1st Class David Baine. “Wherever we go, we are able to connect with people through music. It is a common language that develops and fosters relationships for years to come.”