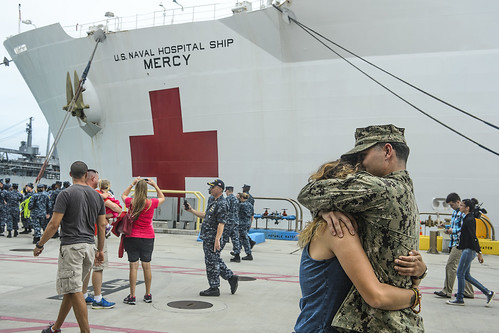 ASAN, Guam - Pacific Partnership 2015 personnel stationed in Guam, but recently assigned to the hospital ship USNS Mercy (T-AH 19), returned home Sept. 4 as the ship pulled in to U.S. Naval Base Guam for a liberty port call.

While many other PP15 personnel will stay with Mercy until Hawaii or the ship’s homeport in San Diego, airmen from the 554th REDHORSE Squadron and Sailors from U.S. Naval Hospital, Guam have reached their final destination and were reunited with their families, friends and parent commands.

“I’ve been in the Air Force for nine years,” said Staff Sergeant Benjamin Preisler from the 554th REDHORSE Squadron. “This was a rewarding experience, being part of something outside of myself. Now I’m looking forward to seeing my wife and kid and enjoying some island life.”

Lindain had mixed feelings about returning home. “It will be nice to relax but it was a great journey. Lots of friendships and camaraderie,” he said.

Pacific Partnership is in its tenth iteration and is the largest annual multilateral humanitarian assistance and disaster relief preparedness mission conducted in the Indo-Asia-Pacific region. While training for crisis conditions, Pacific Partnership missions to date have provided real world medical care to approximately 270,000 patients and veterinary services to more than 38,000 animals. Critical infrastructure development has been supported in host nations during more than 180 engineering projects