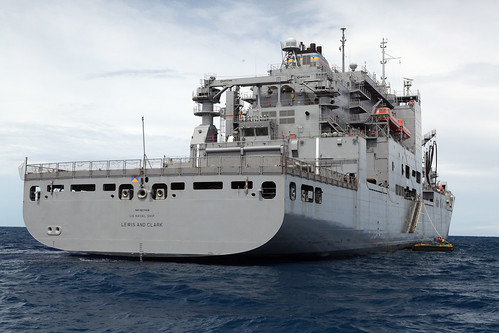 USNS Lewis and Clark (T-AKE 1) sits off the coast of Tarawa, Republic of Kiribati, after arriving for exercise Koa Moana. (U.S. Navy/Grady Fontana)

Exercise KM 15-3 is a four-month international exercise with participants from the U.S. Marine Corps, U.S. Navy, U.S. Coast Guard and host nation participants from various countries in the Pacific Island nations of Oceania.

The first portion of the exercise was in the Tahiti, followed by a leg in Fiji where Marines conducted theater security cooperation (TSC) activities with those host nation partners.

After Tarawa, the Lewis and Clark, which is also part of Maritime Prepositioning Ships Squadron (MPSRON) 2, will carry her personnel and cargo to Vanuatu for more TSC events, then finish off the exercise at Timor Leste in November. The Lewis and Clark is scheduled to return to its home port in early December.

While training in Tarawa, the Marines will conduct military-to-law enforcement activities with Tarawa police, while members of the Navy and Coast Guard will concurrently participate in Oceania Maritime Security Initiative (OMSI) operations, just as they did in Fiji, in support of Maritime Law Enforcement operations along with partners from the Police Maritime Unit Tarawa.

“While the Marines are training on the island with the host nation military or law enforcement agencies, the U.S. Coast Guard has taken this opportunity to use USNS Lewis and Clark, which is the platform for Koa Moana 15-3, to conduct OMSI patrols with the nations these TSCs have been scheduled,” said Navy Capt. Paul D. Hugill, commodore of MPSRON-2.

OMSI is a Secretary of Defense program aimed to diminish transnational illegal activity on the high seas in the Pacific Island Nations of Oceania’s exclusive economic zones and enhance regional security and interoperability with partner nations.

The Coast Guard is responsible for patrolling the waters around the numerous islands associated with the U.S. throughout the region. Each of these islands has territorial waters stretching out to 12 miles from shore. Beyond that, stretching out 200 nautical miles are EEZs, an area defined by international law that allows each nation exclusive rights to the exploration and use of marine resources.

During the OMSI portion of KM 15-3 here, law enforcement agents from the Police Maritime Unit Tarawa, Navy and Coast Guard personnel will ride the Lewis and Clark and intercept and board commercial fishing vessels operating inside the Kiribati (EEZ). The combined team will be looking for potential violations.

Illegal, unreported and unregulated fishing has a significant negative effect on Kiribati’s economy, according to Taraa Teekea, vessel monitor system officer, Police Maritime Unit Tarawa. Outside of Koa Moana, the Police Maritime Unit Tarawa conducts their own operations about six to eight times a year, in which they go off to sea for about 10 days and board an average of 30 suspected fishing boats during each operation.

“We are looking for those who are conducting illegal fishing,” said Teekea. “Some of the common violations are invalid fishing license, no license to transit through our EEZ, over-fishing certain types of fish, and vessels with no (EEZ) entry and exit reports.”

Since the Coast Guard doesn’t have all the assets it requires in order to patrol this region as often as they would like or to enact all the bilateral ship rider’s agreements that they have with partner nations, the MOU with the Navy allows them to use naval vessels.

“Through OMSI, the Coast Guard exacts an MOU with the DoD in order to supplement Coast Guard cutter deployments with naval assets that are transiting across Oceania,” said Hatland. “The MOU allows us to put Coast Guard boarding teams on board DoD ships to conduct Coast Guard missions and it also permits us to embark foreign maritime law enforcement agents so they can enforce laws in their own sovereign waters.”

Initiatives like OMSI help the U.S. to project a maritime law enforcement presence beyond what the U.S. Coast Guard can do alone.

“The Lewis and Clark is performing well. During Koa Moana, we’re doing everything that a USS [combatant ship] can do with regards to command and control,” said Hugill. The reasons the Lewis and Clark is a good platform are the abundance of space, the capabilities of the deck crew and the ability to carry out around the clock operations.

COMPSRON 2, currently embarked in USNS Lewis and Clark and operating in the Southern Eastern Pacific, maintains tactical control of the 10 ships that are forward deployed to Diego Garcia and carrying afloat prepositioned U.S. military cargo for the U.S. Marine Corps, the U.S. Army, and the U.S. Air Force. The squadron’s mission is to enable the force from the sea by providing swift and effective transportation of vital equipment and supplies for designated operations.