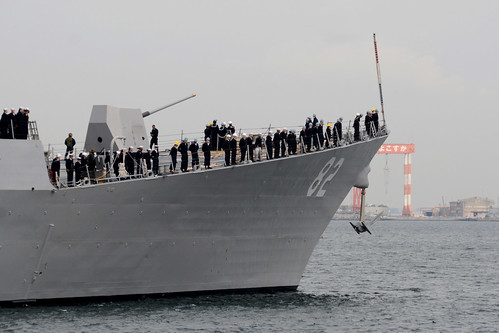 She will conduct her last patrol in the western Pacific before heading to her new homeport of Mayport, Fla.

“Lassen‘s performance in the 7th Fleet was beyond expectations,” said Capt. Christopher Sweeney, commander Destroyer Squadron (DESRON) 15. “Her ability to support the mission improved our relationships with key allies and became an integral part of DESRON’s presence in the Indo-Asia-Pacific region.”

Lassen is one of the destroyers assigned to Destroyer Squadron (DESRON) 15 and Carrier Strike Group 5. Her time forward deployed was highlighted by several significant accomplishments in the Indo-Asia Pacific.

“Lassen has provided support for DESRON and Carrier Strike Group 5 for a long time,” said Cmdr. Robert Francis, commanding officer of Lassen. “I’m proud of the accomplishments of our Sailors that have served in 7th Fleet on such a great ship and I’m looking forward to what is to come after the homeport change.”

Lassen was the first ship to arrive in the Leyte Gulf, Republic of the Philippines, in the fall of 2013 to aid in Operation Damayan after Typhoon Haiyan caused damage to the area. Lassen acted as a fueling station for the helicopter squadrons that aided the remote villages affected.

Lassen has played a role in several different exercises during her deployments.

“Our forward-deployed ships, like Lassen, play an important role in fostering relations with our allies in the Indo-Asia-Pacific,” said Rear Adm. John D. Alexander, Battle Force 7th Fleet. “It’s the mission of our ships to strengthen stability and security of this region.”

In 2006, Lassen participated in her first Annual Exercise (AnnualEx) the largest bilateral exercise conducted in 7th Fleet, and continued the participation throughout her time in Japan. She has also participated Multi-Sail, a DESRON 15-led exercise designed to test interoperability and combat capabilities.

During her last deployment in 2015, Lassen continued her participation in Foal Eagle, CARAT, Multi-Sail and AnnualEx 16. She also hosted a group of midshipmen from the Naval Academy during their summer program.

“I’m honored to take charge of this outstanding crew,” said Francis. “This upcoming tour before the homeport change will provide new opportunities for Lassen and her Sailors.”

Along with continued participation in exercises, Lassen fosters relationships that demonstrate the commitment the United States has to the region through port visits to Donghae, Republic of Korea, Bali, Indonesia and Nagasaki, Japan, Melbourne, Australia, Kota Kinabalu, Malaysia and a number of others during her time in Seventh Fleet.

Often, the Sailors aboard Lassen had the opportunity to participate in community relations (COMREL) projects such as during the multiple visits to Vladivostok, Russia, to foster relations with the Russian Navy, Sailors participated in celebration events and visits to a children’s medical ward and a center for at-risk youth.

During her port visit in 2010 to Goa, India, Sailors renovated a primary school. The Sailors painted a number of classrooms and interacted with the staff and students.

Lassen departs Yokosuka for Mayport with years of experience to use in her new homeport.