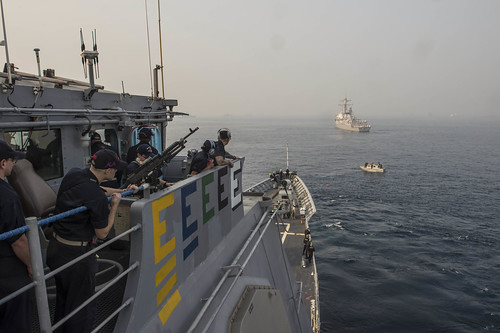 This is an international military exercise hosted by the Indian Navy to help enhance mutual trust and confidence with navies around the world.

The Chief of Naval Operations Adm. John Richardson will also be present at the IFR 2016 to help deepen maritime partnerships between India and the United States. Furthermore, the visit to India and interactions with other Navy leaders are reflections of CNO's recently released "A Design for Maintaining Maritime Superiority," which mentions "expand[ing] and strengthen[ing] our network of partners."

“These critical relationships are enhanced by maintaining interoperable navy capabilities that deter regional aggression and build partner security capacity,” said Cdr. Ed Sundberg, McCampbell’s commanding officer, “For some of my crew, this will be their second time visiting with the Indian Navy. They have a terrific navy and my crew looks forward to continuing and expanding our relationship with them.”

In addition to attending various events of IFR 2016, CNO will meet with Sailors from Antietam and USS McCampbell.

Capt. Michael McCartney, Antietam’s commanding officer said, “We are excited to be part of the Indian International Fleet Review. Most of our shipmates have never visited India and look forward to experiencing Indian Culture first hand.”

The five-day exercise will provide a great opportunity for Sailors assigned to both ships to see and interact with sailors from all over the world. Culinary Specialist 2nd Class Malina Deru, from Taylorsville, Utah, said, "This is the type of experience that only happens maybe once or twice in your career. It's not every day that you get to represent the United States Navy amongst 50 other navies while getting to experience the culture of a foreign country,"

Antietam and McCampbell are forward-deployed to Yokosuka, Japan, and are on patrol in the 7th Fleet area of operation in support of security and stability in the Indo-Asia-Pacific.