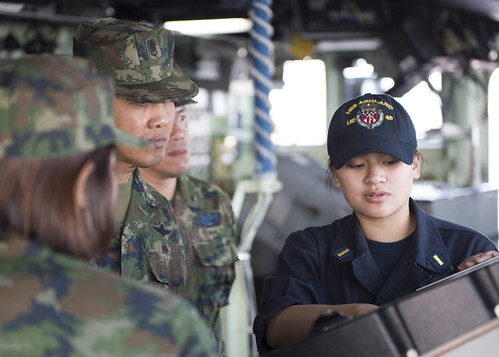 Lt. Kyle Recker, 1st Lieutenant assigned to Ashland, felt that CG 16 was a win for all the nations who participated.

“We had multiple countries come together to plan and execute combined amphibious operations, a very difficult task, and we did it with great success,” said Recker. “The friendships we developed and the relationships we strengthened will help us operate together in future exercises.

Every branch of the U.S. military participated in the exercise.

“CG 16 was a resounding success from a joint forces standpoint,” said Recker. “Ashland integrated with the U.S. Army, U.S. Air Force, and the U.S. Marine Corps throughout the exercise and we demonstrated our ability to work together to complete the mission.” As the only U.S. Navy ship participating in the exercise, Ashland played an integral role in the successful completion of CG 16.

“The Sailors aboard Ashland trained for months leading up to CG 16,” said Harmon. “This exercise consisted of multiple training evolutions that required everyone aboard to work as a team. We worked hard and it is evident that we are a stronger and more capable unit.”

With the completion of CG 16, Ashland will depart Thailand and continue its routine patrol of the 7th Fleet area of operations.