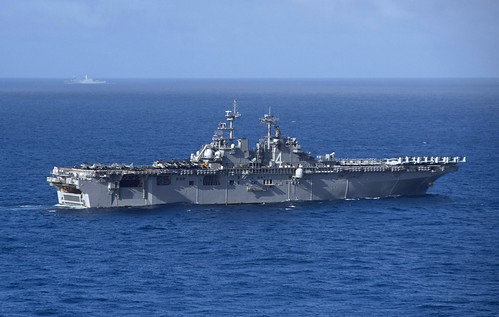 "The BOXER ARG, 13th MEU team has trained hard and is ready to enter the complex 7th Fleet operating area," said Capt. Keith Moore, commodore of Amphibious Squadron 1. "This is a vibrant, diverse and vital region of the world with immense importance to global security. I am looking forward to making new friends as we work with our regional partners to improve cooperation and readiness."

While forward deployed to 7th Fleet, the ARG/MEU team will participate in exercise Ssang Yong 2016, work to strengthen ties with allies, deter conflict and conduct operations in support of the Asia-Pacific Maritime Security Strategy.

“Few regions in the world are as important to America’s interest as the Pacific and 7th Fleet’s area of responsibility. The Boxer ARG, 13th MEU team contributes to the security and stability of our partners and allies throughout the region by engagement and cooperation,” said Col. Anthony Henderson, commanding officer of the 13th MEU. “Yes we are trained and ready across the spectrum of contingencies and potential crisis, but just as important our presence shows our commitment.”

The 7th Fleet AOR spans more than 124 million square kilometers stretching from the International Date Line to the India/Pakistan border and from the Kuril Islands in the North to the Antarctic in the South encompassing 36 maritime countries and half of the world’s population.

The mission of the Boxer ARG is to help provide deterrence, promote peace and security, preserve freedom of the seas and provide humanitarian assistance/disaster response as well as support the Navy's maritime strategy when forward deployed.

The mission of the 13th MEU is to provide a forward deployed, flexible sea-based Marine Air Ground Task Force capable of conducting amphibious operations, crisis response and limited contingency operations, including enabling the introduction of follow on forces and designated special operations in order to support the theater requirements of geographic combatant commanders.