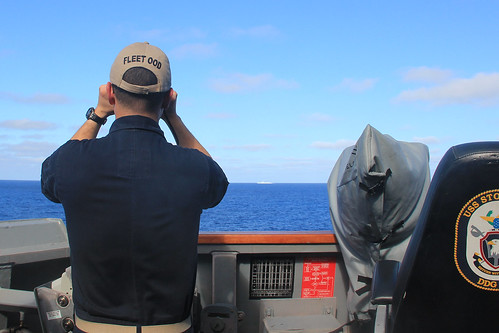 USS Stockdale’s (DDG 106) officer of the deck scans the horizon for other surface vessels during a routine patrol in the South China Sea. (U.S. Navy/Ensign Molly Hanna)

“The strike group is exercising our right to operate in international waters,” said Rear Adm. Ron Boxall, commander, John C. Stennis Strike Group. “Our presence here promotes peace and stability in the region. We’ve got vibrant economies in the Western Pacific, and it’s really important for us to be there for our national interests and to ensure that we can keep the sea lanes free.”

JCSSG is providing a ready force supporting security and stability in the Indo-Asia- Pacific.