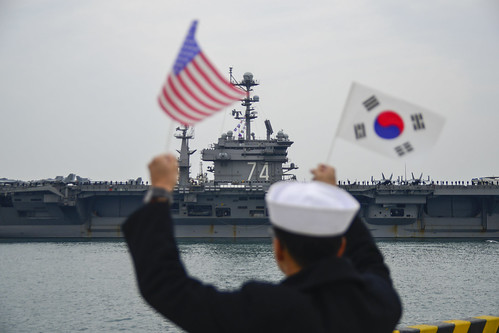 USS John C. Stennis (CVN 74) approaches the pier of Commander of Republic of Korea Fleet base in Busan, the new home for the U.S. Navy in Korea. (U.S. Navy/MC3 Wesley J. Breedlove)

Coordination for this port visit has been in the works for a long time, highlighting the close relationship enjoyed by the U.S. and ROK navies.

Korea is a major fuel hub for U.S. Navy vessels in 7th Fleet area of operations. JCSSG has spent the first two months of its deployment using an alternative fuel blend consisting of 10 percent biofuel manufactured from animal fat mixed with standard petroleum-based fuel. The ships are also using operational procedures and energy conservation measures to increase capability and adaptability.

“By transforming energy use and awareness, we become a more flexible fighting force— whether in the waters around Korea or in the waters we sail around the globe,” said Boxall.

During their time in Korea, JCSSG Sailors have the opportunity to explore the region, participate in community service events, and morale, welfare and recreation (MWR) tours. Whatever they decide to do, Sailors will have the chance to learn more about the culture and practices of one of the U.S.’ greatest allies in the Indo-Asia-Pacific.

“I’m looking forward to the trip to the DMZ,” said Hospital Corpsman 2nd class Alex Perez, from Mayaguez, Puerto Rico. “I never thought I’d ever make it over to Korea, but I’m happy that I finally will.”

“I can’t wait to try the food,” said Engineman Fireman Steven Bressler, from Fort Lauderdale, Fla. “I’ve never had Korean food before so this is going to be a pretty exciting experience.”

Providing a ready force supporting security and stability in the Indo-Asia-Pacific, Stennis is operating as part of the Great Green Fleet on a regularly scheduled 7th Fleet deployment.