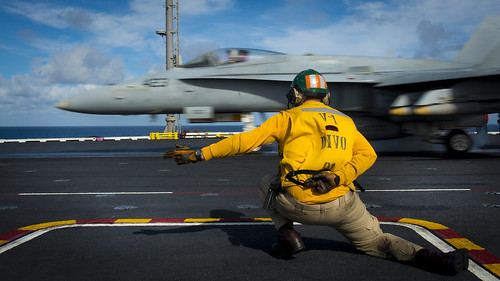 The Carl Vinson training period will include a Composite Training Unit Exercise (COMPTUEX). COMPTUEX evolutions are designed to drill every warfare area including sub-surface, surface, air, and test the strike group's ability to operate in a complex or hostile environment.

COMPTUEX will include a live-fire exercise of the ship's weapon systems; simulated missile and small boat attacks, man overboard drills and underway replenishments.

"COMPTUEX is about 18 days of event driven exercises," said Capt. Eric Anduze, Carl Vinson's executive officer. "It ends with a final battle problem, the completion of which certifies the carrier, air wing and surface combatants for open ocean operations."

Anduze went on to say the event is held by the training carrier group commander, and is "where the rubber meets the road," putting all the crew's hard work up to this point to use.

"The ultimate goal of this exercise is to bring together the carrier, the air wing, the surface and the subsurface combatants as a team that can operate in combat worldwide."

Every facet of the ship's operation, said Anduze, from maintenance to general quarters to cleaning stations, will be integral to the success of COMPTUEX and send Carl Vinson into deployment operating at maximum efficiency and effectiveness.