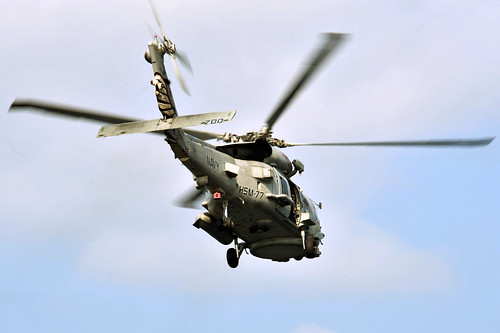 As part of the Navy's master aviation plan (MAP) and to provide the most capable maritime forces forward, the Navy will transition from the SH-60B and SH-60F airframe to the newer and more capable MH-60R and MH-60S helicopters between September 2012 and December 2013.

A total of four helicopter squadrons (HSM-77 Saberhawks, HSC-12 Golden Falcons, HSL-51 Warlords, and HS-14 Chargers) are part of this helicopter transition: HSM-77 Saberhawks and HSC-12 Golden Falcons will change their permanent duty stations from Naval Air Station (NAS) North Island, Calif., and become part of the FDNF at Naval Air Facility (NAF) Atsugi; HS-14 Chargers will change its permanent duty station from NAF Atsugi to NAS North Island; and HSL-51 Warlords will transition aircraft to a new airframe and remain in place at NAF Atsugi and be renamed HSM-51. The squadron changes of duty stations and aircraft transition is expected to begin Sept. 17, 2012 and be complete by December 2013.

The helicopter transition marks a significant improvement in warfighting capability as the MH-60s are a multi-mission helicopter with a mix of sensors and are designed to network with the units of a carrier strike group and operate in a complex warfare environment to counter current and emerging threats. The MH-60R/S have a common airframe, engines, and avionics to simplify maintenance and logistics business practices, reduce infrastructure footprint and airframe life-cycle cost. The transition also improve the readiness of FDNF units in Japan as newer aircraft have a higher operational availability, less maintenance downtime, and a common airframe require fewer resources to operate and maintain.

Upon completion of this helicopter transition, US Navy aircraft forward deployed to Japan will be the most advanced and capable aircraft in the current inventory. The force structure change is part of the Navy's long range FDNF plan to rotate newer and more capable units forward. Increasing FDNF capability supports the United States' commitment to the defense of Japan and the security and stability of the Asia-Pacific region.