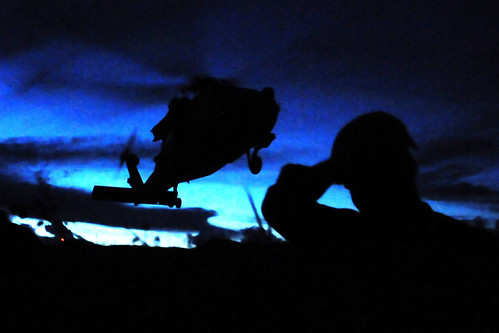 DANDAN, Guam – As an exercise for Valiant Shield 2012 (VS12), two U.S. Navy sailors volunteered to lose themselves in the wilderness here Friday so that the Navy and Air Force could work together to find them.

“Right now, we're simulating two downed F-18 pilots,” said Brown, while reclining in the overgrowth. “It's pretty common. We simulate everything, pretty much, until the real thing actually happens.”

The exercise featured a battery of obstacles that a real-world CSAR would likely face, including simulated air-to-air hostilities and a hostile ground force portrayed Friday by personnel from Explosive Ordnance Disposal Mobile Unit Five.

U.S. Navy Cmdr. Craig Bennett, VS12's lead personnel recovery planner, helped orchestrate the event, which did not include live ordnance of any kind.

“This complex event demonstrates our military's capability to carry out a combat search and rescue mission,” said Bennett, “which is a principle objective of Valiant Shield.”

Bernhardt and Brown played their part from a region of Guam called Dandan, near the town of Inarajan. Dandan is a remote parcel of government land once used by NASA to track Apollo astronauts as they orbited across the sky. On Friday, the retired tracking station itself was scrutinized from above, as Navy and Air Force assets combined resources to find their missing service members somewhere in the dense brush below.

“When we come together as a multi-service force, it gives us a chance to hone our skills. That builds a confidence in each other and allows us to work more effectively as one force,” Stokes said. “If we don't practice, we won't have the know-how we need when it comes time for real combat.”

An Air Force E-3 Sentry coordinated the search from the air, while Navy fighter jets flew protective cover for two Navy SH-60H Seahawk helicopters, which recovered Bernhardt and Brown from Dandan and returned them to USS George Washington after nightfall.

U.S. Navy Lt. James E. Fischer, one of the Seahawk pilots assigned to Helicopter Anti-Submarine Squadron Fourteen (HS-14), expressed slight trepidation from a communication standpoint prior to Friday's exercise. It was his first as mission lead of the rescue vehicle, and he wanted the exercise to run as smoothly as possible.

“Coordinating between so many units is going to be difficult,” said Fischer. “We've just got to make sure we stay on top of it and keep communications open to the [maximum].”

Friday's CSAR operation concluded on schedule and without incident, owing to the effective planning and cooperation of all involved.

“The mission was a small effort to increase our joint interoperability,” Bennett said. “The effectiveness and professionalism of this team demonstrated that our aviators can fly their combat missions with confidence."

The integration of joint training in relation to current operational plans is the focus of VS12, which is a U.S.-only exercise held every two years. The fourth in the Valiant Shield series, VS12 allows the U.S. Air Force, Navy and Marine Corp to gain real-world proficiency in sustaining joint forces in response to a broad range of missions.